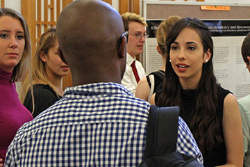 
Not many graduating college seniors can say that in school they both excelled in undergraduate research and managed $1.4 million in student activity funds for their college.

As a junior, the former SUNY Cortland psychology major honed grant management skills as treasurer of the Student Government Association (SGA). That involved working directly with officers of more than 70 organizations on how they could spend their allocated monies responsibly within College and SUNY guidelines.

“The student government work was my focus for a really long while because I believe in being active,” said Buta, who earned a bachelor of science at Commencement on May 13. “You have to put yourself out there and be involved in your community.”

Yet she shifted her focus to academics as a senior. Buta spent last summer in Cortland conducting neurological studies on an electroencephalogram (EEG) machine at the College’s McDonald Building.

“Although I loved community service, last year I realized that if I wanted to get into a Ph.D. program in psychology, I had to narrow my focus and spend my year consumed in my research,” Buta explained.

“This is actually my passion,” Buta said.

Buta’s unusual personal dichotomy between academics and civic-mindedness recently earned her one of the College’s most prestigious honors.

She received the 2017 President’s Recognition for Engaged Learning and Leadership Designation in Undergraduate Research. The honor is conferred upon students who have achieved exceptionally high level of engaged learning and are student leaders.

Currently there are two designations for the recognition, one for civic engagement and one for undergraduate research. Buta’s award, along with its accompanying transcript notation, provides formal institutional recognition of a student’s high-level achievements and participation in independent research or creative activities.

Buta is only the third student to receive an undergraduate research designation on her diploma.

“When I realized that I really liked psychology there were always other parts of me that were interested in other things,” Buta said. “I think that’s normal. That’s part of appreciating intellect and appreciating other fields, too.”

Buta will continue to work in the Psychology Department laboratory of Leslie Eaton, associate professor of psychology. She also was a research assistant in the Cortland Attention Laboratory of Raymond Collings, SUNY Cortland associate professor of psychology. She served both faculty members as a teaching assistant and also tutored students participating in the Educational Opportunity Program.

Buta’s current research involves the recording of brain activity using EEG technology upon eliciting an emotional response from participants who watched a slide show of photographs.

Her investigations, conducted on a prestigious SUNY Cortland Summer Research Fellowship, enabled Buta to present her findings over spring break at the Eastern Psychological Association conference in Boston. A substantial scholarly manuscript naming her as first author is being considered by the peer-reviewed professional journal Current Directions in Psychological Science. She was a presenter and co-presenter of several talks at this year’s “Transformations,” the College’s student research and creativity conference.

Buta also received the Senior Major Achievement Award for Psychology at this year’s Honors Convocation. Her citizenship on campus earned her a Student Government Leadership Scholarship, a Leadership in Civic Engagement Award, and a Judson H. Taylor Presidential Scholarship. A participant in SUNY Cortland’s Honors Program who completed an honors thesis as part of her commitment, she received an Honors College Merit Scholarship for several years.

Buta has always strived for excellence in response to supportive teachers, beginning at Catskill (N.Y.) High School. She relished her first college psychology course while also serving as president of the student council and co-president of Interact, a community service-based club. A National Honor Society student who participated in the Odyssey of the Mind program, she played volleyball and danced in a school musical.

“There was a lot of caring from the teachers there,” she said. “They were always helping build you up, showing you how to be a leader and the meaning of service.”

On the academic side, Buta was among the top 10 students in her high school of 500 scholars.

“I had always been drawn to neuroscience and the stigma that’s on mental health,” she noted. “I would really like to do work that will contribute to improving mental health.”

While the EEG tests she performs on student subjects in the McDonald Building are considered pure rather than clinical science, they could ultimately serve humankind.

For one thing, the Cortland researchers noticed that people who are considered emotionally healthy rebound more quickly from viewing negative images. The question Buta asks is why.

Using harmonic analysis — essentially a mathematical formula — Buta and a number of other faculty and student researchers have begun to interpret the rapid-fire EEG readings of human brain activity while the subjects watch both emotionally gripping and neutral visual images flashed in quick succession on a video screen.

The EEG tracks electrical beats — a bit like heartbearts — given off by the brain, Buta explained. The readings, which look like long graphs of zigzagging lines, feature unique and different bandwidths that if not a “fingerprint” of each individual’s brain at least indicate a range of different personality types and whether the study subject is relaxed or tense.

Although it’s not the primary focus of her original research, Buta is keenly interested in the lab’s research into the way human personalities match up with the EEG readings and what that has to say about managing one’s mood.

“If you were to track your emotions for two weeks, your positive and negative emotions and mapped it out onto an harmonic model, I could tell you that every three or four days you are going to have a bad day,” Buta said. “No one has really looked at analyzing experimental EEG data epochs like that before.

“It’s not that on every fourth day a bad thing is going to happen but internally you are not going to feel as great because that is your pattern,” Buta said. “So what do you do to set yourself up? There’s this assumption that emotions are linear but really we are on this cycle: ‘I had a bad day today because this happened.’ We place it to external events but really it’s an internal event, related to the situations you choose to enter on day four.”

With awareness of these patterns, maybe people can make different choices about the people, places and things they choose to have in their life.

“We also looked at people who were most resilient,” Buta said.

These are the people who always try new foods and take new routes to reach destinations.

“This trait, which psychologists call ‘openness to experience,’ means they are doing things that make themselves resilient.”

Buta will apply this fall to social personality doctoral programs at universities across the country with a goal to begin working alongside her chosen research mentor by Fall 2018. In this most competitive field, the task of earning admission will be slow and difficult and the outcome uncertain despite her stellar work and enhanced transcript.

“You apply to a faculty member to work in their lab and to determine that you have matching research interests,” Buta said. “There’s a four percent acceptance rate nationally. So you apply to 10 schools and hope that you get into more than one and see where you match up best.”

Meanwhile Buta will continue to perform the extremely technically and professionally demanding EEG trials in Cortland with her mentor Eaton.

“I am taking this gap year to hopefully do some things: write more scholarly papers, collect more data, read more, do more hobbies, travel and service work,” she said.

Buta thinks her student government experience will help her handle money if she ultimately lands a career as a groundbreaking academic researcher, but that wasn’t her goal at SUNY Cortland.

“Everybody says that being SGA treasurer is about the money and it is about finance,” Buta said. “But for me, it’s really about people. I take a lot of pride in my interpersonal skills. You constantly have to work with 70 club treasurers to maintain those relationships with people.”

“She was collecting data the entire year she was the SGA treasurer (last academic year),” Eaton noted.

Buta also was SGA vice treasurer her sophomore year. She volunteered as a case advocate intern with the Cortland YWCA’s Aid to Victims of Violence and the Cortland office of the New York Public Interest Research Group.

“I could not begin to list everything she has done,” Eaton said. “She is clearly a student who took advantage of what college has to offer.”