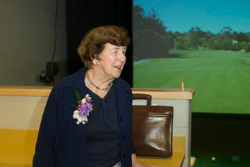 
A few weeks before her 80th birthday, Louise Conley warned the crowd surrounding the first tee at the Champion course at PGA National Resort that she hadn’t played 18 holes in two years.

Then she swung her No. 3 wood and sent the ball an estimated 165 yards into the blue Florida sky and down the fairway.

Everyone knew exactly how far the ball went because the distance, ball speed and other diagnostic data suddenly appeared above the manicured fairway.

Conley, who has played the championship Palm Beach Gardens, Fla., course many times, wasn’t actually in sunny Florida. She was in Cortland, on a dark day filled with storm clouds, testing her skill on a new Student Life Center golf simulator that bears her name.

“I came to the game late in life,” explained Conley, who was in her 60s when she decided to take up the sport. “I wanted to find a place where I could learn golf, so I began to hit golf balls in a cage. After I hit 25,000 golf balls, I decided to try it on a real course.”

Conley, chair of the Cortland College Foundation, found that her practice served her well. Coached by her husband, she soon became good enough to enter – and win – tournaments, always against much younger players.

“I was able to play in a Pro-Am tournament that teamed you with the players you see on TV,” she said, describing the impact the sport has had on her life. “They give you a handicap so you can hold your own out there alongside a pro. You can’t do that in football.” 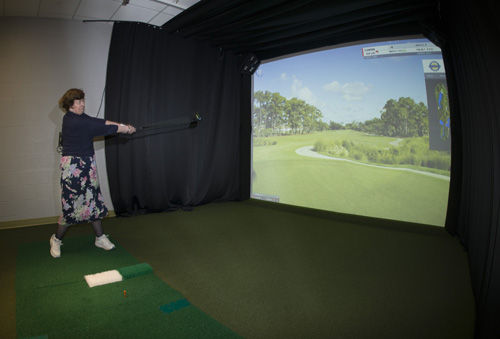 Conley’s desire to expose students to a sport with lifelong benefits inspired her to become the first SUNY Cortland supporter to put her name on a feature of the College’s Student Life Center, a striking, glass-walled structure housing more than three and a half acres of recreation and fitness opportunities. Since it opened it February, an average of 2,500 students, faculty and staff use the building every day.

The golf simulator allows users to play virtual replicas of some of the most famous golf courses on the planet by driving balls into a sensor-filled backdrop that displays courses so realistic that Conley was able to point out the porch of the condominium where she often stayed.

SUNY Cortland President Erik J. Bitterbaum unveiled a plaque identifying the Dr. Louise McCarthy Conley Golf Range during a June 12 dedication ceremony at the center. Conley’s $30,000 naming gift was just the most recent example of her strong support of the College’s educational mission.

She is the granddaughter of Francis J. Cheney, the second principal of the Cortland Normal School, and the daughter of two graduates, Rollin McCarthy ’16 and Clara Cheney ’17. A licensed psychologist from Princeton, N.J., Conley has offered countless hours of her time to SUNY Cortland and a transformational amount of financial support, including a million-dollar gift to endow the Louise M. Conley Chair in Educational Leadership.

“Louise helped set the bar for others to follow,” Bitterbaum said. “She is self-effacing, humble and passionate about this institution.”

To learn more about SUNY Cortland’s naming program, contact the Institutional Advancement Office at 607-753-2518, or visit the program’s web page.