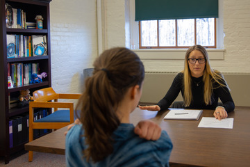 
Karen Davis had a quandary when it came to her forensic psychology course.

Davis, associate professor in SUNY Cortland’s Psychology Department, wanted her students to get hands-on experience with forensic interviews. Mental health professionals use these interviews to evaluate the psychological condition of individuals who have committed crimes.

The interviews serve as a vital step in the legal process, to protect the rights of those who may not be able to understand the implications of a plea or may be unable to fully communicate with law enforcement or legal representation.

For ethical and practical reasons, undergraduates cannot conduct or even sit in on these interviews because they lack the requisite training. Students generally get this type of experience for the first time at the graduate level.

The outside-the-box solution was in SUNY Cortland’s Performing Arts Department.

The eight psychology students had the opportunity to conduct a live forensic interview that will be followed up by writing reports, just like the real-world professionals who do this every day. The musical theatre students had a chance to practice their character development and improvisational skills.

Brilynn Winkleblack, a senior psychology major from Interlaken, N.Y., and Sarah vonEgypt, a sophomore musical theatre major from Hopewell Junction, N.Y., recently sat down to conduct one of these mock forensic interviews.

Davis drafted many pages of fictional documentation to create a scenario. The information included police reports, medical records and background information for the psychology student conducting the interview as well as a summary for the student actors.

VonEgypt portrayed a person named Amanda. Beyond the simple character summary, she was largely improvising and drawing on the skills she’s learned in her musical theatre classes.

“It was fun to understand and dissect Amanda and her background and what she was going through,” vonEgypt said. “My character had been in a mental institution and had been accused of hitting a police officer and criminal nuisance. I was answering questions as to whether I wanted to plead, go to trial or plea bargain. Overall, it was a really cool experience to come up with things in the moment and really commit to Brilynn in an office rather than in an ‘on stage’ setting.”

For Winkleblack, who is looking to continue her studies after she graduates from SUNY Cortland, the first-hand experience of conducting an interview reaffirmed her passion for the subject matter.

“I like the assessment part of it,” she said. “For grad school, I’m hoping to go into a Ph.D. or Psy.D. program that’s clinical-oriented. I am leaning toward more forensic stuff, especially after today. I’m hoping to be conducting the assessments and writing the reports and deciding that defendants are confident to stand trial or not.”

Conducting a mock forensic interview was just part of a semester-long project for the students in Davis’ class. They first learned about concepts in class and watched Davis do a mock interview of her own. Next, they will complete a full forensic evaluation and write a report following the standards of practice used by forensic evaluators. Ultimately, the students are using the mock interview as a means to have a graduate-level experience as undergrads.

Many of Cortland’s psychology majors will wind up using these skills in the workplace.

“Forensic evaluators can work in psychiatric hospitals, for the Federal Bureau of Prisons or in private practice,” Davis said. “Even if students don’t go on to do these types of evaluations, if they go on to do social work or case management, having those interview skills is part of it. They’ll be evaluating mental health symptoms. Even if they don’t do forensic evaluations, those basic skills are going to be really useful.”

Davis hopes that the university’s Psychology and Performing Arts departments can continue to collaborate in the future and discover even more ways for Cortland students to harness their talents and skills to help others academically.

“If it ever happens again, I would definitely recommend it to all of our musical theatre majors,” vonEgypt said. “It was a great experience. It’s a great way to rehearse and practice your craft and work on your acting and improvisation.

Winkleblack admitted that the mock interview process just wouldn’t have been the same had she been interviewing another psychology major. VonEgypt’s acting skills heightened the experience and had Winkleblack hanging on every word.

Most of all, it created a deep mutual appreciation of talents between students from different disciplines who might not have crossed paths otherwise.

“She (vonEgypt) was super, super impressive,” Winkleblack said. “She was able to roll with it and there were times where I was shocked. It ended and I was like, ‘Wow.’ She wasn’t given a lot of information and she was able to do almost a two-hour interview on how little information she had. It was a lot of work.”