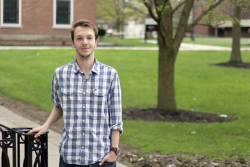 
Junior Jeremy Collings developed his love for the outdoors during summers spent at the nearby Lime Hollow Nature Center, first as a camper and later as a nature educator.

He developed his passion for research by working with his parents, Raymond Collings and Leslie Eaton, who both teach in the College’s Psychology Department.

Now, as a recipient of one of the nation’s most prestigious scientific scholarships, he will have an opportunity to combine his scientific curiosity with his interest in nature and pursue a research career dedicated to making sense of our changing planet.

The conservation biology major was one of 496 college students from across the country to be named as a 2019 Barry Goldwater Scholar. He was the only student from a SUNY comprehensive college selected this year.

“It’s been really awesome and validating,” said Collings, who learned he had earned the scholarship in late April. “Before I even heard the news, going through the application process, the support I got from faculty advisors in my department, in Bowers Hall and across the campus has been really pivotal in approaching writing the essay and my career decisions in general.”

The Goldwater Scholarship program is one of the oldest and most prestigious national scholarships in the natural sciences, engineering and mathematics. It seeks to identify and support college sophomores and juniors who show exceptional promise in becoming the next generation of research leaders in these fields.

Applying for a Goldwater Scholarship requires students to submit a summary of research they have already worked on as well as a description of work they hope to do in the future. Collings has an impressive resume of research already under his belt.

As a high school student and as a SUNY Cortland freshman, he assisted his parents in psychology research. After his freshman year, Collings worked with Assistant Professor Andrea Davalos of the Biological Sciences Department on her work in invasive species management.

He expanded on that research over the summer between his sophomore and junior years as an undergraduate summer research fellow, assisted by a grant from the New York State Flora Association, studying swallow-wort management in New York State Parks. European pale and black swallow-wort, twining vines with seed pods similar to milkweed plants, are rapidly invading fields and forests in the Northeast, smothering local vegetation. They may be threatening monarch butterfly populations as adult monarchs have trouble distinguishing between milkweed and swallow-wort when laying their eggs, potentially increasing larval mortality.

Collings spent much of this academic year doing data analysis and he is currently writing a manuscript of a paper for publication.

“Going into college, I knew I wanted to study conservation and outdoor sciences and doing research here is really what honed me in on the idea that I can do real science with it,” he said. “Instead of just going out and identifying plants and talking to people about natural history, I can study these things and go through the scientific method and find knowledge about plant ecology and ecology as a whole.”

This summer, Collings will do further plant ecology research in conjunction with Texas Tech University. He was awarded a fellowship from the Ecological Society for America and will study the colonization of plant roots in and outside of deer exclosures to assess whether deer are affecting the symbiotic relationship between fungi and plants.

Texas, like New York, faces a challenge of deer overabundance. Collings will be investigating how a large population affects plant life, plant nutrition and soil biology through their eating patterns.

“Ecology is already a really complex field in terms of all of the ideas and interactions and the variables you have,” Collings said. “Once you add in human effects and how to solve them, you’ve opened the door to interdisciplinary study where now you have to take into consideration sociology, politics, economics. It is really problem solving of doing research out in the field, which is very different than a lab environment.

“I enjoy having these huge, complex problems in front of me that stretch out into all of these different disciplines. I want to use biological research to try to address some of those problems.”

Collings plans to apply for Ph.D. programs in plant ecology this fall. He hopes to someday teach and continue his research at the college level.

He is thankful for encouragement and advice he’s received from SUNY Cortland faculty who helped push him toward research in the first place.

“There’s always been an open door somewhere in Bowers or across campus where I can go to talk to someone who’s going to give me really strong advice,” Collings said. “I’ve gotten congratulations from a lot of faculty members and it’s super awesome to know that all of these people who I look up to as amazing scientists and amazing researchers and amazing professors are recognizing the work that I’ve done.”