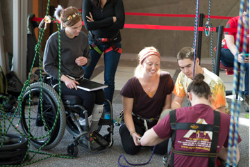 
Long before the Americans with Disabilities Act (ADA) was signed into law in 1990, SUNY Cortland championed the opportunity for which the civil rights act stands.

Several actions by the College supported inclusiveness and achievement many years before they became popular practice: admitting wounded veterans in the wake of World War II, securing funding in the 1960s for programs that benefitted children with disabilities, and establishing an adapted physical education curriculum that would serve as a model for others across the nation.

ADA, which prohibits discrimination based on a disability, celebrates the 25-year anniversary of President George H. W. Bush’s signing it into law on July 26. And the College will be there on Saturday, July 25, when the local community honors the historic legislation with a picnic in the city’s Courthouse Park.

The event, organized by Access to Independence of Cortland County, takes place from 11 a.m. to 2 p.m. Free food and drinks will be offered in addition to inclusive games. Members of SUNY Cortland’s Recreation, Parks and Leisure Studies and Communication Sciences and Disorders departments also will be on hand to represent the College’s many faculty members dedicated to accessibility and equal opportunity in their fields.

“Our students, alumni, faculty and staff champion the belief that people should not be defined by their disabilities,” said SUNY Cortland President Erik J. Bitterbaum. “Many of them lead by example and represent the same ideals that helped establish the ADA as federal law 25 years ago.”

The proof is in the College’s product, from inclusive special education majors teaching students in the classroom to foundations and social advocacy faculty members pushing for the adoption of progressive policies.

Each year, roughly 250 students provide physical activity opportunities for people with disabilities through community programs organized by the College’s Physical Education Department. SUNY Cortland students also provide hundreds of free and faculty-supervised hearing screenings each year for local children through the Center for Speech, Language and Hearing Disorders. And the Recreation, Parks and Leisure Studies Department provides the information that populates the Inclusive Recreation Resource Center database, which helps families find recreation facilities in New York state that are accessible and compliant with the ADA.

Earlier this year, the College endorsed the ADA Legacy Project taking place across the nation throughout 2015. “All People, All Abilities” became the theme of multiple advertisements both locally and nationally to highlight the many disciplines that advocate for people with disabilities. The concept also spurred a special webpage and many of the articles in the spring/summer edition of Columns, SUNY Cortland’s alumni magazine.

The publication can be viewed in its entirety online.

Access to Independence recognizes the anniversary of ADA with several events each year. This year, in addition to the celebration picnic, the not-for-profit services provider for people with disabilities will hold an inclusive “Stroll and Roll” that starts at 10 a.m. near the organization’s building at 26 N. Main St. in Cortland.