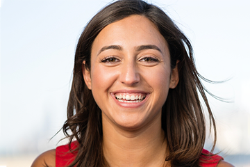 
Elena Evangelou ’19 is competing in the Rose of Tralee International Festival in Kerry, Ireland. Evangelou, a native of Queens, N.Y. who recently graduated with a bachelor’s degree in business economics, is representing New York City  as the festival’s New York Rose.

Her mother was born in Pallaskenry, Ireland and her father is from Cyprus. The Rose of Tralee Festival is celebrating its 60th year in 2019 and it recognizes women from around the world who were born in Ireland or who have Irish ancestry.