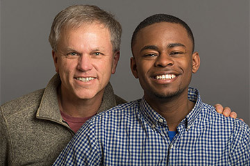 
Professor Steve Broyles has taught thousands of biology majors at SUNY Cortland — students who have gone on to be medical doctors, award-winning researchers and college professors themselves.

Brandon Williams ’17 was the first to call him dad.

People who don’t know them might be confused, mostly because there’s no resemblance or family connection. Williams, the son of a single mother, never met his biological father. And Broyles, chair of the College’s Biological Sciences Department, has a wife and two adult sons of his own.

“He changed my life,” said Williams, a conservation biology major who was born in Lakeland, Fla., spent his childhood in Elmira, N.Y. and graduated from high school in Atlanta. “He’ll deny it and say it’s my own ability, but he’s done more for me than I’ll ever be able to repay.”

Their relationship traces back to the field biology and ornithology courses that introduced them during Williams’ sophomore year. Since then, Williams has traveled to leadership conferences in Wyoming and a research-focused internship with the Great Smoky Mountains National Park in Tennessee. And now this summer, he’s conducting plant research at Cornell University’s Boyce Thompson Institute.

Collectively, those moments have forged a meaningful bond that transcends the classroom for both student and professor.

Then Broyles rattled off the unmistakable qualities he sees in Williams — curiosity, resilience and limitless potential — just like a proud father would talk about his son.

Money was tight for Williams’ family growing up. His mother, Alisa, worked odd jobs as a single parent to support Brandon and his brother Michael, who is 10 years older. They moved from upstate New York to Atlanta in 2011, but a last-minute financial aid hang-up forced Brandon to change his initial college plans.

He came to Cortland as a freshman in January 2014 because his grandmother still lives in nearby Elmira. He wanted to be near family.

“I remember meeting Brandon when he was a freshman,” said Broyles, a SUNY Cortland faculty member since 1992. “I didn’t have him in any classes that first year, but I remember that he would show up at talks and he was always present. He just wanted to be involved.”

The next year, as a sophomore, Williams took his first courses with Broyles. And Broyles remembers the subtle but sincere moment that initially gave meaning to their relationship, at least for him. One day, before an ornithology class and in front of other students, Williams asked Broyles if the professor could teach him how to tie a necktie. Williams needed it for an awards ceremony.

It was a small skill that the student had never learned, one that a father might teach to his son.

“That was so special to me,” Broyles said. “And I think other students were taken by it too.” 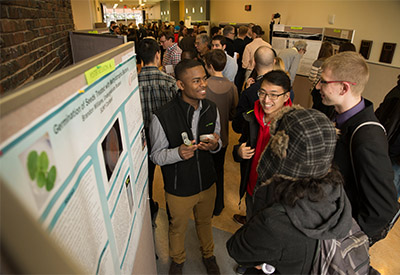 Brandon Williams, center, presents his research at the College’s Transformations event in 2016.

Williams and other classmates jokingly began referring to Broyles as dad, a practice that eventually became habit for Williams. Broyles still refers to him as a son.

They’ve conducted research together, paddled canoes together and even brewed their own homemade beer together. Growing up in urban neighborhoods, Williams was unexposed to the wilderness. At SUNY Cortland, birdwatching alongside Broyles at 5 a.m. accounted for some of his favorite experiences.

“We’d go to all of these places at crazy hours of the day,” said Williams, who aspires to earn a Ph.D. and continue his plant research as a professional. “I loved it, and I don’t consider myself a morning person at all.”

Similarly, Williams said he arrived in Cortland as a shy introvert who struggled to make eye contact or conversation with others. Eventually, however, he served as a resident assistant, peer tutor and conference presenter. Williams pulled important lessons from all of those roles, but he points to Broyles’ encouragement as a key catalyst for his transformation, especially the academic recognition that came with it.

Before college, Williams only traveled when he was moving to a new temporary home. Broyles recalled that his student’s beat-up suitcase looked like something from the 1950s. And still, Broyles encouraged Williams to seek out opportunities with the Student Conservation Association (SCA), a national non-profit organization that aims to create young leaders for the environment.

Williams’ efforts were rewarded with four separate trips to Wyoming plus the summer internship with the National Park Service in Tennessee. During his second trip out west, he was one of 30 students who was asked by the SCA to consider how to recruit more underrepresented students to the conservation biology field.

One of his recommendations followed from his own Cortland experience: create meaningful, potentially life-changing relationships with professors, similar to the one he shared with Broyles.

The reality, of course, is that their bond goes beyond the classes that brought them together and a mutual passion for conservation biology. It’s something closer to the love shared by a father and a son.

“Last summer, I got a phone call on my birthday from Brandon,” Broyles said. “He called to say, ‘Happy birthday, dad.’

“You just don’t have that relationship with every kid.”