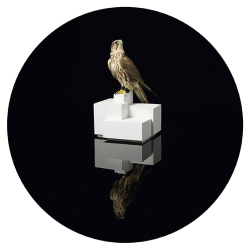 Bart Keijsers Koning, who curated “Anomie: Fractured Art Norms,” will speak at 5 p.m. His talk is free and open to the public.

Normal gallery hours are 10 a.m. to 6 p.m. Tuesday through Friday and 10 a.m. to 2 p.m. on Saturday. The gallery is closed Sunday and Monday.

Keijsers Koning is the curator and co-owner of the LMAKprojects gallery in New York City. The gallery space, located on the Lower East Side, presents works in all media, ranging from drawing, painting, photography, video/film, and sculpture by artists from all over the world.  It has been reviewed by publications such as The New York Times, Art in America and The Village Voice.

Prior to joining LMAKprojects in 2009, Keijsers Koning curated in the Netherlands and the U.S. He graduated from School of Visual Arts in 2000 and specialized in painting.

The SUNY Cortland exhibition he curated includes paintings, drawings, sculpture and video art from six contemporary artists. Featured artists, inspired by art movements mostly prior to the late 20th century, include Martin Basher of New Zealand; George Bolster of Ireland; Jasmina Cibic of Slovenia; and Jeff Grant, Russell Nachman and Carlos Rigau, all of New York City. Each one pieces together fragmented practices from the past to create new artistic insight.

The noun “anomie” refers to a breakdown of social bonds between individuals and their communities, making the title fitting for the exhibition.

Each artist lends a different perspective:

• Basher is a sculptor and painter whose work frequently deals with consumer culture. With references to minimalism, design and retail display, his sculptures feature formal, yet subtly uneasy, arrangements of consumer goods.

• Bolster often examines belief systems with his drawings and sculptures. His work reveals personal political and religious skepticisms, looking at “the propaganda and power of visual culture continually employed … by a variety of organizations.” His recent series of drawings and sculptures merges the evolution of the human species with body dysmorphia and plastic surgery.

• Cibic investigates objects and the status attached to them. Her work, which is presented through photography, performance, installation and video, is “an elaborate and humorous investigation into the preservation of culture and its objectification.” Her 2010 print “Perch for Falco-cherrug” is pictured above.

• Grant works across a variety of media, including sculpture, video, installation and drawing, and deals with the transcendence of an artist’s mark, or the placement of material in a new identity. He “exposes the inherent restrictions in a wide variety of materials and alters their identities by imposing new constraints on them.”

• Nachman, known for his use of watercolor on paper, uses allegory to take a critical look at his own cultural roots and culture at large. He relies on black metal music culture to portray a harlequin, or jester, for current times. These modern day jesters “become the unwitting relaters of an unspoken truth — the folly behind all of our own masks.”

• Rigau relies on artifice, display and perception, using plastic imitations of natural materials in his installations and two-dimensional works. His practices reflect a combination of his Cuban heritage and his investigation of the American notion of aspiration.

For more information, images of exhibition works or to schedule a group tour, contact Gallery Director Erika Fowler-Decatur at 607-753-4216.