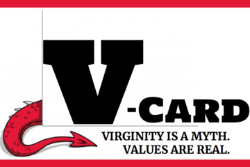 
Cupid isn’t the only myth that SUNY Cortland sexual health educators want members of the campus community to think about on Valentine’s Day.

The other is virginity.

Starting today, representatives of SUNY Cortland’s Women’s, Gender, and Sexuality Studies and the campus “It’s On Us” Action Team are distributing wallet-sized V-cards with the phrase “Virginity is a myth. Values are real,” and a message about affirmative consent in sexual decision-making.

“Virginity is not rooted in biology— it's something that we made up and use to shame people for sexual behaviors. Virginity can mean different things to different people – depending on the circumstance,” said Professor of Health Jena Nicols Curtis, coordinator of Women’s, Gender and Sexuality studies and one of the leaders of the V-card initiative. “We tend to talk about virginity in ways that disproportionately shame women, ignore the validity of same-sex relationships, and revictimize survivors of sexual violence.

Curtis hopes to ignite campus conversations about sexual values, especially the value of affirmative consent, which requires that all sexual behavior should be based on a knowing, mutual and voluntary decision made by all parties involved. A sex educator since 1987, Curtis sees virginity as a harmful social construct and believes that community standards and individual values are the guiding factor in healthy sexual decision-making. The conversation is important because student values about sex range across a continuum from abstinence to sexual intimacy.  Understanding and communicating these differences is a key part of affirmative consent and healthy sexuality.

Students will distribute the cards in dining areas, residence halls and academic buildings throughout the week. They will also table with additional information about the issues in Corey Union and other locations throughout the week. In addition to the cards, they will be distributing sexual health information, including a frequently asked questions sheet about virginity myths and resources for students who want more information about healthy, values-based sexual behavior.

Students Active for Ending Rape (SAFER) will also be advocating consent and encouraging people to voice their feelings about sex this week. They also want to raise awareness about sexual assault, domestic violence and other forms of assaults on campus.

Carolanne Clark, a senior majoring in psychology is SAFER’s representative for the ‘It’s on Us Action Team as well as the Diversity, Equity, and Inclusion Board, was involved in the creation of the V-day cards and supporting material.   She thinks that the V-Card project is important because the idea of virginity is toxic.

“Women are put down if they lose their virginity ‘too soon’ and men are put down if they don’t lose their virginity ‘soon enough,” Clark said. She also challenged the idea that perpetrators of sexual assault can “take the virginity” of those they hurt as something that further traumatizes survivors. V-cards, Clark said, allow student to replace the social construct of virginity with the values individuals have about themselves and their relationships.

On Valentine’s Day, SAFER will be tabling on campus with the theme of “What is love? What isn’t love?” with the aim of raising awareness of potentially abusive relationships.