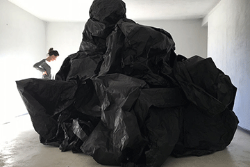 “The subject of ‘forever’ raises questions about beyond now, beyond origin, beyond the object, beyond the form,” Ramsdale said. “Several objects in this exhibition present the opposite of, the reflection of, or the negative of the intended form.”

Her work in past exhibitions has resembled nothing so much as small but heavy looking asteroids that have crash-landed in the gallery, or furniture with irregular dimensions that play games with the observer’s sense of conventional man-made forms and their intended uses.

Ramsdale, who currently teaches sculpture at Kutztown University and lives in Philadelphia, where her studio is also located, will open a solo exhibition, “Form & Forever,” at the Dowd Gallery on the SUNY Cortland campus, Monday, Aug. 27.

“Form & Forever,” Heather Ramsdale’s first exhibition at the Dowd Gallery since she received her Bachelor of Fine Arts from SUNY Cortland in 1997, will run through Friday, Oct. 5.

Presented by Dowd Gallery and the Art and Art History Department, the event is co-sponsored by the Sesquicentennial Committee, which has included the exhibition among an ongoing series of intellectual and cultural events during the 2018-19 academic year to celebrate the College’s rich 150-year history.

Gallery exhibitions and all programs are free and open to the public. Gallery hours are 10 a.m. to 4 p.m. Monday through Friday and by appointment. Contact interim gallery director Jaroslava Prihodova at 607-753-4216 or jaroslava.prihodova@cortland.edu for more information or regarding group tours.

The gallery will host an opening reception for Ramsdale from 4:30 to 6 p.m. on Thursday, Aug. 30, in the gallery located inside the Dowd Fine Arts Center on the corner of Prospect Terrace and Graham Avenue in Cortland, N.Y.

Additional related events will include:

Ramsdale obtained a master’s degree in fine arts from the University of Pennsylvania and also studied at Goldsmiths College in London.

She was nominated for a Terra Foundation for American Art Award and an Outstanding Student Achievement in Contemporary Sculpture Award from the International Sculpture Center. Subsequently, she received two Pollock-Krasner Foundation fellowships for residencies in upstate New York.

Recent shows include a group exhibition at Savery Gallery in Philadelphia and a solo exhibition at The Gallery at Delaware County Community College. Ramsdale recently completed a residency at Joya: arte + ecologia, an arts-led field research center, in Andalucia, Spain.

Ramsdale’s objects invite viewers to engage both their curiosity and intellect, noted Prihodova.

Ramsdale explains that the process by which she constructs these sculptures allows the form to reveal something that is not entirely in her control and perpetuates a dance between authority and a lack thereof over the object.

“For me, there is inherent truth revealed when a lack of control is present,” she said. “This body of work exerts a reference to previous projects that investigate concepts of transit, time and place, and how we situate ourselves within each.”

Her aesthetic leans towards minimalism but often breaks the mold by incorporating found objects and unconventional materials into otherwise austere pieces. This method provides not only tension between used materials but also offers viewers a recognizable space enhanced by poetic sense of humor.

“When symbolism, that appears both familiar and new, presents itself through the process of making these sculptures, I like to believe the revelation offers insight into an existence beyond the here and now — perhaps a code, map, or hieroglyphic,” Ramsdale said. “I delight in the theatrics and humor of these forms, which help balance the darker nature of my queries. The forms suggest, for me personally, imaginable answers about the unknown.”

During her recent residency at Joya: arte + ecología in southern Spain, Ramsdale primarily worked with large rolls of black and white paper.

“Paper can be manipulated to identify the moments in which the fragility of form can become heavy in gesture,” she explained. “Some of the large sculptures recall the landscape but without duplication, bringing into question the outside versus the inside, and trying to locate myself in both. Paper is not necessarily synthetic, unless you measure it against a demanding landscape in the quietest of places. No matter the material I work in, a balance in dichotomies emerges and signifies completion.”

Ramsdale’s planned workshop will involve participants a hands-on process of making a site -pecific, large-scale installation made from paper. This exploration in illusion, weight and permanence of a non-traditional material, will result in a temporal work that will remain on view for the duration of the exhibition.

Her visual approach, in part, was formulated during her undergraduate studies at the Art and Art History Department at SUNY Cortland under the guidance of several faculty members such was the late Jim Thorpe, Charles Heasley and Libby Kowalski. The late George Dugan continued to be a mentor to Ramsdale until his passing. Perhaps the biggest influence on Ramsdale’s development as sculptor was professor Allen Mooney, instructor of sculpture.

“The process of creating an idea in theory, and bringing into existence a three-dimensional version of that idea, or in other words, to make something imaginary become real, was my personal version of magic,” she said. “Allen taught me that conceptual ideas were the output of placement, balance, color, and many other formal decisions. It was a very Bauhausian experience, with a strong underpinning of formal design, and discovery through process. It was not about making work that focused on personal emotions per se, but recognizing that formal decisions influenced the way in which the objects offered meaning and were experienced by the viewer.”