Alumna recognized at the State of the Union 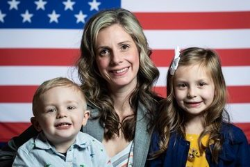 
Amy Howard Williams ’02 doesn’t do it for the attention.

Yet for one moment, Williams and her family were in the center of the national political spotlight for her tireless volunteer efforts on behalf of military families.

Williams, whose husband, Townsend, is a sergeant first class in the U.S. Army, was selected to represent the families of America’s armed forces at the 2020 State of the Union Address on Feb. 4.

She has spent countless hours helping others in roles with the Military Spouse Advocacy Network and InDependent, an inclusive wellness community for military spouses. That’s on top of the care packages, the meals and the nights spent in hospitals with those who have had children while their husbands were serving overseas. And she does it while raising her own two small children while her husband is working more than 7,000 miles away.

“Amy works full-time and volunteers countless hours helping other military families,” President Donald J. Trump said during his address. “For the past seven months, she has done it all while her husband, Sergeant First Class Townsend Williams, is in Afghanistan on his fourth deployment to the Middle East.”

The only thing that would’ve made the moment sweeter was if Williams’ husband was there with their children, Elliana, 6, and Rowan, 3, in the House chamber.

It turns out he was.

“Amy’s kids have not seen their father’s face in many months,” Trump continued. “Amy, your family’s sacrifice makes it possible for all of our families to live in safety and peace.

“But Amy, there is one more thing. Tonight, we have a very special surprise. I am thrilled to inform you that your husband is back from deployment. He is here with us tonight, and we couldn’t keep him waiting any longer.”

Amy put her hand over her mouth and turned around. It was true. Dad scooped up the kids and they all embraced. For a moment, the Williams family was reunited, live on television around the globe.

In the weeks since, Williams has received messages from friends and family and those she’s touched with her generosity.

“So many people have said how proud they were of me and how selfless I am,” Williams said. “I don’t think I’ve ever heard that so many times. I don’t talk about what I do because I actually don’t like the attention. That was really hard for me to be on TV worldwide.”

Service, however, is part of her DNA. Williams threw herself into helping others through Greek life at SUNY Cortland, both as president and community service chair of the Delta Phi Epsilon sorority.

Like many Cortland students, Williams came to campus with dreams of becoming a teacher. She realized that wasn’t her destiny, switched her major to English and embarked on a career in marketing and public relations that has taken her around the globe.

Those two experiences on the SUNY Cortland campus led Williams to a pair of valuable realizations. One, switching her major at the last minute gave her the confidence to know she could accomplish anything she put her mind to. Two, there are few things more meaningful in life than service to others.

After graduation, Williams, a Plattsburgh, N.Y., native, moved to New York City to pursue her career. There, she met Townsend Williams, who had also grown up in Plattsburgh and wound up in New York as an emergency medical technician and a member of the Air National Guard.

Townsend Williams joined the U.S. Army, the couple got married. Soon they were stationed at Camp Ederle in Vicenza, Italy.

The experience of moving overseas gave Amy Williams a deep appreciation for the trials military spouses go through as they face the challenges of adapting to a new way of life.

“It sounds like a dream now, but I was a deer in the headlights,” she said. “I had no one that was helping me. I had to navigate the Army world all by myself, and I did it, but I don’t want anyone to ever feel like I did. I will help anybody navigate this very scary world so they don’t feel alone.”

For the last two years, Williams’ family has settled at Fort Bragg, North Carolina. Her day job is the chief of advertising, marketing and public affairs for the U.S. Army Special Operations Recruiting Battalion (Airborne). She also thrives as the leader of the Family Readiness Group for her husband’s company in the 82nd Airborne Division, a role that involves sensitive conversations about causalities or fatalities in operations overseas.

Largely, her volunteer work centers on the little things that mean the most.

Williams has worked with Gold Star spouses, organized local suicide awareness runs and mentored other military spouses seeking employment in a new location. Sometimes she’ll swing by the store to pick up coloring books or crafts for children whose parents are half a world away. Or she’ll grab some paper plates and plasticware to save the family member at home a few minutes of doing dishes so that they can take a break or spend more time with their children.

“It’s always easy to help the troops because there are always drives to do care packages for them, but people often forget the military families at home,” she said. “If you’re near an installation, look for ways to help the families.

“Military families will never ask for help. It’s ingrained in us to not ask for help. You have to just do it for them. If you know someone in the National Guard or the reserves and you know their spouse is gone, just mow their lawn. I swear to you that person will cry and be so grateful. I had someone who mowed the lawn the entire time my husband was deployed and it was the most amazing thing.”

Williams has previously been recognized through the U.S. Army Installation Management Command’s Unsung Hero Award and as the 82nd Airborne’s 3rd BDE 1-508 Battalion Volunteer of the Quarter.

On top of her volunteer work, Williams has earned certificates in culinary arts, food writing and nutrition from the Institute of Culinary Education, New York University and the American College of Healthcare Sciences, respectively, as well a certificate in Italian Studies from the University of Maryland University College. She recently completed a master’s degree in marketing from Southern New Hampshire University.

As for the State of the Union surprise, Williams was completely unaware her husband was in Washington. She received a message from him shortly before the event that he was going to sleep because of the time difference downrange.

Two days earlier, she spent Super Bowl Sunday texting updates to Townsend, a San Francisco 49ers fan. His request was just a ruse to build up the shock of his return. Townsend was watching while en route to Washington, D.C.

On the night of the president’s speech, she was completely focused on her mission — the value of volunteering for military families at home — and on her children.

“I found out right before, walking in, that we were sitting right next to the First Lady and I thought, ‘Oh dear God, I hope my children behave,’ she said. “It was nerve-wracking. We had incredible support. To hear from so many people that they have noticed how selfless I am has been a huge compliment.”

Williams’ children are certainly following in her footsteps. Elliana recently received the kindness award at school.

For those who are looking to join Williams’ campaign for military families across the U.S. and abroad, her message is simple. The little things count. A modest gesture means the world to those separated from spouses and parents.

“A simple gift package for the spouse and some crafts for the kids is so meaningful for the family just to know that someone is thinking of them and someone knows that they’re there,” she said. “The solders downrange get care packages from so many organizations and the Girls Scouts send them a million cookies.

“But people don’t always ask about the families and kids are often forgotten. Sending them books or other things is so treasured. They know people thought of them.”