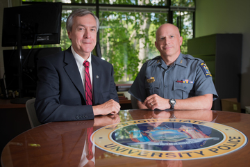 Dangler, the chief of police since 2003, is surrounded by the latest in high-tech police equipment since a recent move from Van Hoesen Hall. His officers enjoy a state-of-the-art dispatch room to monitor all parts of campus. Improved intake, interview and evidence rooms have helped streamline the work for all the members of the department.

Yet Dangler won’t get to enjoy his new office for long. After 40 years of leadership and service to the College and the greater Cortland community, Dangler will retire on July 7.

Assistant Chief of Police Mark DePaull, who has served in the department since 1990, will take over as chief on July 9.

The improved accommodations for the department are just the latest in a long line of accomplishments for Dangler in his four decades at SUNY Cortland.

Dangler earned his bachelor’s degree in criminal justice at Upper Division College in Utica, which was later rebranded as State University of New York College of Technology at Utica-Rome and is currently known as SUNY Polytechnic Institute. Don McHugh, SUNY Cortland’s director of security at the time, taught night classes at Upper Division College. Dangler heard about an upcoming opening at SUNY Cortland. With McHugh’s help, he earned an interview and subsequently a job offer. Dangler’s first day on the job was April 27, 1977.

In the late 1970s, SUNY began a shift from security-focused work to community policing. The name of the department, across all SUNY campuses, was changed to the Public Safety Department. Dangler recalls those early years as an important career influence.

“There was a specific shift, a group of officers called the Community Service Unit,” Dangler said.

Those officers worked exclusively in the residence halls, as a liaison between the staff and the students, he explained. They had four shifts then and Dangler worked 7 p.m. to 3 a.m. weekdays and 8 p.m. to 4 a.m. weekends.

“I spent many years on the CSU shift as an officer,” he said. “It was a good experience to have on the way to becoming a supervisor. I had contact with many people on campus and we took care of all criminal incidents that happened on campus because we didn’t have an investigator. There is a lot of experience and knowledge that I gained through that.”

Dangler graduated from the Syracuse Police Academy in 1979 and earned a promotion to lieutenant in 1983. Since SUNY Cortland did not have a dedicated investigator at the time, Dangler had dual roles as an investigator and supervisor. His experience in the former role made Dangler a key member of the Cortland County Drug Task Force, becoming its first representative from SUNY Cortland. He served in the position for eight years.

The 1990s was a decade full of changes for public safety officers at Cortland and throughout the SUNY system. Pete Lalla took over as chief in 1990 when McHugh became SUNY Cortland’s director of human resources. Legislation enacted by the end of the decade recognized SUNY officers as police officers rather than peace officers, giving them additional abilities to issue warrants and stop-and-frisk individuals.

When Lalla retired in 2002, Dangler served as interim chief of police for one year before he officially assumed the role in 2003 following a nationwide search.

SUNY Cortland’s University Police Department expanded under Dangler’s watch, adding positions such as the assistant chief of police, a full-time investigator, a pedestrian safety aide, a communications specialist/dispatcher and a security systems division. Dangler also oversaw the creation of a standalone Parking Department.

A member of the executive board of the SUNY Police Chiefs Association for the past 13 years, he held the positions of treasurer, third, second and first vice president and served as the association’s president in 2016.

The Cortland Elk Lodge 748 recognized Dangler as one of its Lawman of the Year candidates in 2017. He also was recognized by the lodge for his years of service.

In 2011, SUNY Cortland’s University Police Department was accredited by the New York State Department of Criminal Justice Services. Of the 514 police departments in New York state, which includes cities, towns and county sheriff departments, only 150 have been accredited since the program began in 1989.

The Department of Criminal Justice Services sends assessors for a three-day audit to ensure a department is following policies and procedures before it issues an accreditation. The process is repeated every five years to verify that accredited departments continue to hold high standards. SUNY Cortland’s University Police Department was reaccredited in 2016.

“The accreditation was huge,” said DePaull, who helped spearhead the department’s effort. “That took us years to walk through and prepare for.”

DePaull, like Dangler, has been a steady influence in SUNY Cortland’s University Police Department for decades. After starting as an officer in 1990, DePaull was promoted to lieutenant in 2001 and became the department’s first assistant chief of police in 2006.

“It will be relatively easy, the transition, because as assistant chief, when (Dangler) isn’t here, I fill in for him,” DePaull said.

The men have worked on many of the same committees and split up work between them. As assistant chief, DePaull has run the day-to-day operations of the department.

“So it’s a lot easier than someone coming from the outside,” DePaull said. “I’ve been in the SUNY system since I was 23 years old, so I know how it operates.”