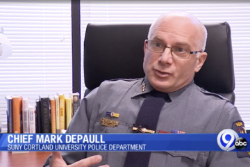 Spectrum News spoke with a number of students, including Valerie Dellorusso.

“I always feel really safe,” she said. “I’ve never felt like I was in danger at any time, night or day.”

WSYR-TV in Syracuse spoke with a number of university officials and students, including UPD Chief Mark DePaull.

“I think at SUNY Cortland and SUNY-wide across the state, we’ve always bought into the community policing aspect and the whole community concept where we’re engaging the community and we’re breaking down any barriers we may have with the community,” he said.