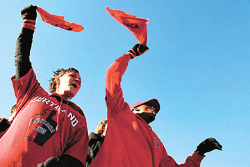 
When the record-setting edition of the Cortaca Jug football game took place at MetLife Stadium on Nov. 16, Cortland fans and alumni traveled from across the country.

But the distinction for the furthest trip likely belonged to a small contingent of European students rooting for the Red Dragons and coming from Germany and Finland — some 4,000 miles away. With a record crowd of 45,161, they helped SUNY Cortland and Ithaca College break the attendance record for a Division III football game.

The rivalry game between the two upstate New York colleges isn’t the group’s only destination. They’re visiting the U.S. as part of a collaborative course in international sport management that includes students from SUNY Cortland, JAMK University of Applied Sciences in Jyväskylä, Finland, and Heilbronn University of Applied Sciences in Heilbronn, Germany.

Together, 28 students from the three countries will spend a week learning on SUNY Cortland’s campus and in New York City. They’ll meet with Cortland alumni who work for Madison Square Garden, NBC Sports, the National Football League and the Brooklyn Nets. And they’ll have fun too, mixing in a visit to the National Baseball Hall of Fame and Museum in Cooperstown, N.Y., a New York Islanders game at Barclays Center in Brooklyn, N.Y., and activities in Cortland.

The semester-long class serves as an introduction to international topics such as sport for development and peace and social media as a global communication tool. Students in Cortland meet weekly and, because of time zone differences, much of the coursework is delivered virtually through video-recorded lectures and case study assignments.

Classmates met early in the semester through a live video chat. Groupwork assignments mix students from all three countries. And when they learned about the value of branding cities as major event hosts, a scholar from South Africa weighed in with first-hand experience from helping plan the 2010 men’s soccer World Cup. Students also have heard from experts in Sweden, Turkey and the United Arab Emirates.

The highlight of the course will be the weeklong experience in New York, which also includes a final case study competition in person. Each year builds more interest among Cortland sport management majors, Mahoney said. Last year, 22 students traveled to the Netherlands for a similar COIL culminating seminar week.

The opportunity to tie in the historic Cortaca Jug game in 2019 was impossible to pass up.

“I think everyone is very excited,” said Mahoney, who has led the course five times. “Trying to explain the significance of this game (to students in Finland and Germany) was difficult because Europe doesn’t have the same collegiate sport model.”

After attending the Cortaca Jug game on Saturday, the group traveled to Cortland for the early part of the week. In addition to lectures and groupwork, they’ll be led on a low-ropes course by SUNY Cortland’s Physical Education Department, attend Sport Management Club events and take in a men’s basketball game between Cortland and Ithaca.

Then they’ll travel back to New York City to meet with Cortland alumni excelling in the profession.

One of those visits will be led by Katie Keenan ’05, M ’10, director of major events for the National Football League. Keenan will be coming back in New York City after helping organize a Monday Night Football game between the Kansas City Chiefs and Los Angeles Chargers played in Mexico.

“That’s perfect course content for what we’re doing,” Mahoney said. “These massive American sport leagues are seeing the benefits of expanding their international presence, and our students are learning about it right there in the moment.”