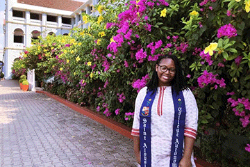 
As someone that has been active in equity leadership roles, SUNY Cortland junior Patricia Winston explores concerns such as colonialism, racism and global economic structures in local communities.

Winston, an anthropology/social philosophy major with a concentration in Asian/Middle Eastern studies from Queens, N.Y., is actively involved in community outreach. For such dedication, she recently was named among only 212 college students in the country to earn a prestigious 2021-22 Newman Civic Fellowship.

Campus Compact, a national coalition of more than 1,000 colleges and universities committed to the public purposes of higher education, coordinates the yearlong fellowship program that provides training and resources to future leaders.

The fellowship program will guide Winston as she expands her demonstrated skills in leadership and community involvement. The students selected demonstrate a commitment to finding solutions for challenges facing communities locally, nationally and internationally.

Winston gained new perspective that strengthened her qualifications for the fellowship after she studied abroad in India in January 2020 after receiving SUNY Cortland’s Doris Morris Stuart ’60 Study Abroad Scholarship.

She used her trip to fulfill her interest in seeking roles to advance social and racial equity.

“The main thing that I took from my experience in India was that patriarchy is very real,” Winston. “It was really sad to see.

“Not in an ethnocentric type of way … women are fighting for their rights. There are a lot of countries struggling for equality which motivates me even more.”

Since then, she continued her leadership role by voicing her opinion on proving a woman’s value in societies.

“My future plan is to be an anthropologist in the Gullah Geechee culture,” she said.

The Gullah Geechee population are found in southern states including Georgia and Florida. During slavery, they were isolated on a cotton plantation surrounded by water yet were able to conserve their varied African heritage. The combined cultures became known as the Gullah Geechee.

“They have their own dialect and beautiful art,” Winston said. “The art is what I wanted to get into the most because it emphasizes women’s lives and their children.

“It sparked an interest in me because I was wondering why most of the paintings were involving women,” Winston said. “If you look up Gullah Geechee paintings, you’ll notice there are a lot more women in the photos than men.”

Winston’s work shines a spotlight on injustices that are all too often hidden from public view.

“I think that the Gullah Geechee is a great start for that,” Winston said. “I want to broaden my horizons on other cultures as well and help as many people as I can.”

Winston’s commitment to diversity began at Forest Hills High School, N.Y. where she started to become more socially progressive in terms of learning about different cultures and backgrounds.

“It’s crazy to hear, but you’re a product of your environment,” Winston said. “High school definitely changed my outlook. I got into the Academy of Public Service and started speaking up more, 100%.”

Students in Forest Hills’ Academy of Public Service combine a study of public policy and government with active involvement in the community.

As a first-year student at Cortland, she registered for the World First Learning Community, which blended courses including Introduction to World Anthropology, Culture through Film, The World since 1500 and English Composition.

“After taking Cultural Anthropology, I realized what I really wanted to do when I got here,” Winston said. “It opened my eyes to other cultures and ethnicities. Originally, I wanted to be an archaeologist. I came to realize that my true passion is with helping other people.”

“The World First Learning Community pushed me to go into more anthropological studies rather than archaeology,” Winston said. “Once I got older, I started to become an ally for different communities. I wanted to pick up another major that helped me achieve more activism work, which was social philosophy.”

Over the next year, Winston plans to focus on finishing her undergraduate degree. She will pursue a graduate degree in anthropology and ultimately aspires to earning a Ph.D.