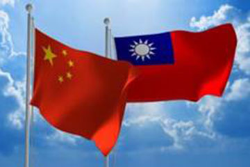 
When U.S. President-elect Donald Trump accepted a congratulatory post-election call from Taiwan’s president last fall, he made headlines by suggesting that the United States’ complicated relationship with the independent island nation might change.

Although the U.S. has long refused to officially recognize the government of Taiwan as a sovereign nation, corporations and educational institutions have had more freedom to define their relationship with Taiwan, which China considers part of its official territory.

Six students who hail from the island nation in the Pacific Ocean — which has a land mass smaller than Switzerland but triple the human inhabitants — arrived this fall for a year-long, one-way study abroad experience.

“My students didn’t have any idea where Taiwan is, why Asia matters,” Weng said. “This can help them as they try to understand Asians more.”

Weng decided that, outside of his own classroom, the best way to educate the U.S. students on campus about the complexity of Asia would be an influx of visiting students directly from the region.

A graduate of Taiwan’s Tamkang University, with a B.A. in business administration and M.A. in international relations, Weng completed his education in the U.S., where he earned master’s and doctoral degrees in political science from University of Texas at Dallas.

“I contacted the Tamkang University and used my connections to establish this program,” Weng said. “Fortunately they had students who were willing to try this type of exchange program. This is our first group.”

Weng worked with both the College’s International Programs Office and a Tamkang University liaison, Professor Pao, chair of the political economy department, to launch the program.

“They bring a diversity of perspective into our classrooms and our residence halls and to the campus in general,” Mary Schlarb, director of International Programs at SUNY Cortland, said of the Taiwanese students.

She praised the academic and cultural preparedness of the six visitors, who come from the Lanyang campus of Tamkang University. Tamkang’s main campus is located in Taipei, Taiwan’s capital, while its branch is in a northern suburb of Taiwan. All classes at Lanyang are taught in English.

The Taiwan contingent is already larger than the number of students on campus from mainland China. or affiliated with China. Four students from two mainland China institutions are also on campus, said Schlarb. The campus also boasts exchange and matriculated students from other Asian countries, including Japan, India, South Korea, Bangladesh and Afghanistan.

Future educators from China have been coming to the College for 36 years from Capital Normal University in Beijing, coordinated through the College’s International Programs. Two more arrived in the fall. Initiated with the support of James M. Clark, president emeritus, the partnership with Capital Normal is among the oldest exchange programs with China in the SUNY system.

Two Chinese students also arrived from Qufu Normal University, a large, multidisciplinary doctoral level institution located in Qufu, an historic city in Shandong Province near China’s eastern coast. An exchange agreement was reached in late 2015 for this partnership fostered by Shufang Shi Strause, an associate professor in childhood/early childhood education. Faculty at both institutions hope that the next step will be for American students to reciprocate and study in China, completing a full-fledged exchange opportunity that makes study abroad more affordable for citizens of both countries.

SUNY Cortland is also hosting two Chinese higher educational professionals on campus, one through February and a second through August. A representative from Qufu Normal University’s international office is on hand to recruit American students for future exchanges. Meanwhile, a faculty member from Beijing Foreign Studies University is conducting research in the Physical Education Department for one year, co-hosted by Childhood and Early Childhood Education Department.

“What I hear from faculty is they love having international students in their classes,” Schlarb said. “Which is nice because that makes them feel more welcome.

“There are challenges. Sometimes language presents some difficulty,” Schlarb said. “But we hear many of the international students write very well, at an advanced level.”

As a group, the students from Taiwan appear to prefer to be active, involved and engaged members of a campus community rather than sequestered in the library with book or laptops.

For example, Hsieh “Thomas” Ling-Kuan, a political science major at Tamkang University, is eager for the intellectual give-and-take of visiting another country.

“For now, I just try to take the opportunity to talk with American students, as many as possible, and experience the life as an American college student, also make some new friends,” Ling-Kuan said.

“What I want to do is to give students from U.S. or other countries some idea about my home country (and) also plan some trip to travel around United States.”

Li “Joy” Lu, who at age 19 studies English as a second language, recalls how she tried kayaking for the first time when she traveled to the William H. Parks Family Center for Environmental and Outdoor Education at Raquette Lake for a leadership retreat.

“Although I used all of my strength and my arms hurt, it was really fun,” Lu said in November. “It was also my first time to carve a pumpkin last weekend, and it was a lot of fun!”

Jie “Jessica” Hsu, an English as a second language major, emailed, “I'd like to climb on the mountain to enjoy the beautiful scenery and have a calm and peaceful time.” Hsu’s own country is known for its tropical mountains.

“Professors are very helpful and students here are a lot more active in class compared to students in Taiwan,” said Wen-Pin “Eric” Hsu, a computer science major. “The food is okay, but a little bit boring: always pizza and salad. People here are friendly and the car drivers always let people go across the road first. In Taiwan car always go first.”

The Taiwan visitors even reached out to classmates back in Taiwan by posting a lighthearted YOUTube video account in Mandarin about their adventures to date. The camera panned on Le “Joy” Lu as she narrated her visit from the Bistro in the Student Life Center as well as her rooms inside the West Campus Apartments and Weng’s office in the Political Science Department of Old Main.

The Taiwanese students technically are not in an exchange program but a one-way study abroad program, where we are not yet sending SUNY Cortland students to Tamkang, explained Schlarb.

“They are all non-degree students who will study here for a year and then go back to their home campus,” she said.

However, Weng hopes to eventually see a two-way student exchange develop between Cortland and the Lanyang campus so U.S. American students can become much more versed in Taiwan’s politics and culture.

Officially named the Republic of China, Taiwan’s government is organized as a unitary semi-presidential constitutional republic that runs the country from its capital in Taipei.

Situated off the southeast coast of the People’s Republic of China, Taiwan is claimed as a territory by its far larger neighbor and is steadily pressed toward eventual unification, a governmental and diplomatic situation of extreme complexity and interest to political scientists.

Next summer Weng and two other College faculty members will lead students enrolled in a three-week, six-credit study abroad summer course that lets them sample the history, politics and culture in both China and Taiwan.

Led by Weng, Strause and Luo Xu, a professor of history, students enrolled in the “China and Taiwan: One Culture, Two Sociopolitical Systems” class will visit Beijing, Qufu and Taipei, enjoying the hospitality of the College’s three partner institutions and experiencing a wide variety of cultural sites, including the Great Wall, the Confucius Temple and the National Palace Museum. The course, from June 2 to 22, offers credits toward requirements in political science, history and education. More information is available through the Study Abroad office website, cortland.edu/studyabroad.

“I see this course as a promising opportunity to strengthen our collaborations with our partners while stimulating the flow of Cortland and other SUNY students to China,” Schlarb said.