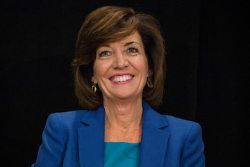 The event will take place at noon on March 22, in Jacobus Lounge, Brockway Hall. The event is free and open to the public. Members of the Cortland community, students, faculty and staff are invited to attend and learn about the free-tuition proposal that could revolutionize higher education in New York and revitalize the state’s economy.

In addition to Lt. Gov. Hochul, speakers will include SUNY Cortland President Erik J. Bitterbaum, a strong supporter of the initiative, and Student Government Association President Michael Braun, who will offer a student perspective.

The event is one of several similar visits planned for SUNY campuses throughout the state.

The lieutenant governor’s office this week released the following announcement:

Higher education is a necessity to succeed in today's global economy.

Governor Cuomo is taking the lead on alleviating the burden of student debt. New York’s tuition-free degree program, the Excelsior Scholarship, is the first-of-its-kind in the nation and will enable thousands of bright, young students to realize their dream of higher education.

Under this groundbreaking proposal, more than 940,000 middle-class families and individuals making up to $125,000 per year would qualify to attend college tuition-free at all public universities in New York State.

Let's make college a reality, not a dream for New York's middle class.