Students to Pledge Against Sex Assault 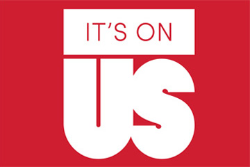 
Nationwide, studies show that one out of every five women experiences sexual assault during her college years.

You’re probably thinking, “Somebody should do something about that.”

Kaitlyn Seager, a senior special education major, disagrees. She, along with dozens of people on campus and thousands throughout the United States, think the solution does not rest with some vaguely defined “somebody.” It lies with us, the SUNY Cortland community.

“It’s happening, and we need to be able to take a stand against it,” Seager said. “If you see something at a party, if you see something on the street, you need to step in and intervene. It’s so simple, but people need to feel comfortable doing it.”

In other words, it’s up to us — the friends and acquaintances of potential victims and their potential abusers — to step in and prevent sexual activity from taking place without both parties’ consent.

SUNY Cortland students will have an opportunity to make a public promise to do their part and help spread awareness of sexual assault on Thursday and Friday this week in the lobby of the Student Life Center. Seager and other members of Sexual Health and Assault Prevention Educators (SHAPE) will ask students to sign the “It’s On Us” pledge and take steps to share their commitment publicly.

“It’s On Us” is a national program aimed at encouraging bystanders to intervene before non-consensual sex can occur. It is an initiative of President Barack Obama’s White House and has the support of major Hollywood celebrities, musical performers, professional athletes and college campuses across the country. Learn more at Itsonus.org.

From noon to 4 p.m. on Thursday and Friday, students can sign the four-line “It’s On Us” pledge and take a selfie of themselves with the “It’s On Us logo” to share through social media.

“Awareness is everyone’s responsibility, and it’s on all of us at SUNY Cortland to recognize that non-consensual sex is sexual assault,” said Cindy Lake, associate director of Residence Life and Housing and SHAPE’s co-advisor. “We need to do all we can to create a campus culture in which perpetrating this crime is difficult, if not impossible.”

The pledge that students, faculty and staff are being asked to make consists of four simple promises:

“It takes 30 seconds to take the pledge, but it could have a huge impact on people’s lives,” Seager said. “This is a way for students to have a voice. It’s a way for us to acknowledge that it’s OK to intervene.”