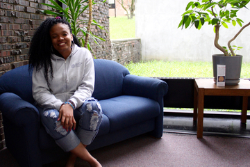 
SUNY Cortland senior Michelle Candelo completed high school while living in a New York City homeless shelter after immigrating from Colombia at age 16.  She was the first in her close-knit family to graduate high school and the first to earn an associate’s degree.

And on Saturday, May 13, she was the first to receive a four-year degree, a bachelor’s in community health from SUNY Cortland.

Against steep odds, and with the help of faculty and friends at College, her father, mother, brother and sister were all there to witness this historic family moment.

“I’m going to be on my knees crying,” said Candelo, 23. “I never thought I’d get to this point through all of these struggles. It’s significant for me to have my parents be there for that moment.”

The moment was so important to the Candelo family that her parents carefully put money aside for months, saving to hire a driver to take them from New York to Cortland, with a detour to pick up her younger brother at SUNY Delhi.

Then, just weeks before Michelle Candelo was scheduled to walk across the stage at Commencement, the family received stunning news.

Bayron Candelo, 22, who was due to get his associate’s degree from SUNY Delhi later this month, was diagnosed with lymphoma and needed surgery to remove a tumor. The money the family had been saving for their Cortland trip went instead toward the brother’s medical expenses.

Jena Nicols Curtis, associate professor of health, learned about the situation at the end of a casual conversation with Michelle Candelo, a normally cheerful and constantly smiling student worker in the College Health Department.

Candelo had stopped by to thank Curtis for setting up a tutor for one of her most challenging courses. At the end of that conversation Curtis asked, “How is everything else going?”

And over the next few minutes, Candelo’s life story spilled out in conversation with Curtis.

Soon after, Curtis arranged for her husband, Todd Curtis ’11, to  pick up the Candelo family in New York on his way back to Cortland from a work assignment in the Washington, D.C. area. Gonda Gebhardt, SUNY Cortland’s associate director of international programs, will host the family overnight.

Some SUNY Cortland friends have started a GoFundMe page to raise the roughly $300 needed to rent a van to take the Candelo family back home. The important thing, however, is that they will all be there together.

Family means a lot to Michelle Candelo. At age 16, she legally immigrated to New York City with her mother and younger siblings, Bayron and Eilyn, then 15 and 12, respectively. Her father had traveled back and forth between the United States and Colombia for years, supporting the family financially. Now they had an opportunity to start a new life together.

Not speaking a word of English, Michelle Candelo was enrolled as a freshman at The International High School at the Lafayette Educational Complex in Brooklyn. She taught herself the language through dedication in the classroom and lots of popular music and television shows.

Yet by 2012, two years after the family first came together in New York, Candelo’s father had an illness that forced him to miss work. He lost his job. Candelo returned home from school one day to find the family’s mattresses and television laid out on the sidewalk. They had been evicted.

The Candelo family found refuge in a homeless shelter after three days on the streets. The Candelos would live there for the next eight months before getting back on their feet. Candelo journeyed two hours each way each day from the shelter in the Bronx to her school in Brooklyn.

With no computer or internet connection at the shelter, Candelo would stay after school to do her homework and then stick around for basketball practice. She had to navigate her way back to the Bronx on buses and trains before the 10 p.m. curfew or else she’d be locked out for the night.

Although Michelle Candelo studied with other Spanish-speakers from around the world at International High, she was the only Colombian in her class. After a decade of attending the same Catholic schools together, her brother and sister were enrolled at middle schools in other parts of New York.

In a city of eight million people, Candelo felt all alone.

“It was all new for us,” she said. “My mom was crying because my brother and sister were in different schools. Taking the trains so difficult, going up and down. We didn’t have trains in Colombia. We got lost so many times.”

At 6-foot-3, Candelo found solace and built confidence on the basketball court. Lafayette girls’ basketball head coach Kareem Benson recruited her for the team because of her height. Benson also inspired Candelo to work hard in the classroom, telling her that her mix of smarts and athletic ability would help her earn a college acceptance letter.

Candelo graduated from high school and studied at SUNY Sullivan for two years, playing basketball there for one, and earned an associate’s degree. Family is everything for Candelo.

College education for Michelle Candelo and her siblings wasn’t part of the plan for the Candelo family when they immigrated to New York. A lack of jobs and opportunity in Colombia was the driving force behind the move. Michelle Candelo remains in touch electronically with her friends from Colombia and she says many of them are hoping to follow in her footsteps.

“So many people wish to be in my situation and I feel lucky that I’m here and I’m trying to get an education and do the right thing,” Michelle Candelo said. “This is something big and I’m making history. Neither of my parents graduated from high school. I graduated from high school, I went to get my associate’s degree and now I’m almost close to getting my bachelor’s. I never thought I’d get this far in my life with all of the struggles I went through when we became homeless back in 2012. I never expected that. I came here and I wanted to achieve my dreams but once you leave your country, you just don’t know.”

Michelle Candelo plans to work in youth counseling, helping teenagers who are marginalized because of ethnicity or language or family finances.

First, she’ll complete her studies in a health internship in London, England this fall, an opportunity arranged through Gebhardt and the international programs office.

Jena Curtis marvels at Michelle Candelo’s persistence. She’s also amazed at her humility. For all of the challenges thrown Candelo’s way, Michelle Candelo has triumphed. And yet she still goes out of her way to thank all of those who have done things on her behalf as she’s navigated toward a college degree.

“Michelle's perception of her life is that she's been blessed with so many good people who have helped her do this,” Jena Curtis said. “Her story, when she tells it, is all about this wonderful coach who saw her and saw potential and said hey, “You're smart enough to go to college.” He told her that if she didn't keep her grades up, she couldn't stay on the basketball team.

“Her perception is that people have done amazing things for her,” Jena Curtis continued. “She wants very much to work with inner-city youth who are at-risk because they don't have the best home lives or family lives and she wants to help those young people make good decisions. Her sense is that she had people do that for her. She was so lucky to have those people and she wants to be that person for other kids.”

Eight years ago, Michelle Candelo was a scared high school freshman in a new country, trying to learn the language and the culture. Now, thanks to those who helped prepare her for college, and those who helped her succeed in college, Candelo picked up her diploma with her parents on hand as witnesses.

“I’m so grateful that I met people who were willing to help me,” Michelle Candelo said. “They knew that I wanted to work so hard to make my goals possible. Because they saw that in me, they were willing to help me out. I want to be able to pay them back. I want to show them that anything is possible as long as you work hard for yourself and you have discipline and you stay humble and you know what you want. That’s going to take you far.”