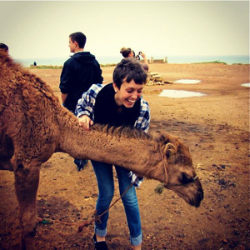 
SUNY Cortland recently awarded approximately $39,000 in scholarships and exchange awards to help 58 of its students expand their educational horizons through study in Cape Town, South Africa, Nagasaki, Japan and Cologne, Germany and other countries.

The College, through its International Programs Office (IPO), will provide $29,800 in scholarships so 54 students can study abroad during the 2014 winter session or spring semester. Additionally, through the IPO’s many exchange agreements with international universities, four SUNY Cortland students will receive tuition waivers and grants totaling $9,345 in exchange value to help pay for their international study.

Along with an almost 26 percent increase in direct scholarship funding since last year, the College is giving scholarships to a growing number of students asking for them.

“Through the generous support of alumni, faculty and friends, the College removes financial barriers to participation in overseas programs,” she said. “Eligible students also can access financial aid and we offer several programs that are equivalent in cost to a semester on campus.”

Recipients were selected based on criteria that included high academic achievement, financial need, involvement in extracurricular activities, a personal essay and letters of recommendation. A description of the scholarships and the award recipients appears below:

Overseas Academic Program (OAP) scholarships are awarded to students accepted in a study abroad program. The scholarship is for amounts between $200 and $400 for winter recipients and between $300 and $800 for spring recipients.

Two winter 2014 OAP travelers completed internships in Belize. They were:

The remaining winter 2014 OAP winners used their scholarship as follows:

The remaining spring 2014 OAP winners used their scholarship as follows:

The Charles A. Gibson Scholarship, which was created in 1998, awards students participating in a study abroad program outside the Western Hemisphere who demonstrate high academic achievement and financial need. Two scholarships were awarded for $1,250 each in spring 2014 to:

SUNY Cortland graduate Kevin A. Rowell ’83 created the award in 1998 to support the overseas studies of a student who has participated in club sports, student government and volunteer work. The spring 2014 recipient of this $1,500 award is:

The Marcia Spaeth McDermott Professional Study Abroad Scholarship was created in 2009 by the late, former acting dean of the School of Professional Studies, to support the overseas studies of a SUNY Cortland student majoring in a school program. The recipient of the $1,500 scholarship for spring 2014 is:

Created in 1991, the Uschald Study Abroad Scholarship is named for Willi A. Uschald, professor emeritus of foreign languages and director emeritus of international programs at SUNY Cortland. Uschald Scholarships are open to students accepted to a study abroad program who are U.S. citizens. The spring 2014 recipients of between $500 and $900 are:

Three students received the scholarships to attend the University of Salamanca, Spain:

Two awardees will study in Dublin, Ireland through SUNY Geneseo:

The College presented four SUNY Cortland students with exchange awards resulting from agreements with some of the College’s 25 international partner universities, saving the selected students a total of more than $9,000. The partner universities have agreed to waive tuition for students involved in the exchange so that an award recipient pays only the SUNY tuition for the study abroad opportunity.

Two recipients will study at University of Salamanca, Spain:

Two others will attend Griffith University in Australia:

For more information on the scholarships, contact the International Programs Office at 607-753-2209.