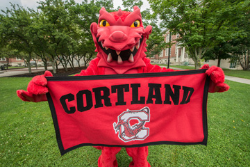 Victor E. Knight collected 50.67 percent of the vote to Blaze's 49.33 percent in moving on to the Elite Eight round of the competition. Last year, Blaze made a run to the Final Four.

SUNY Cortland fans showed a tremendous outpouring of support for Blaze this year in helping the College's mascot knock off both SUNY Poly and Adirondack Community College in the first round and nearly making a huge comeback against Geneseo.

Prior to the competition, SUNY administration sent a series of questions to mascots at all SUNY campuses. Below are the questions, as well as Blaze’s answers:

Where are you from?

Cortland. I was hatched on the banks of the mighty Tioughnioga River, to be exact.

What do you do to get pumped before a game?

What is your favorite snack?

Whoever Cortland is playing.

Who is your biggest SUNY rival?

In terms of mascots, I’d have to say the Geneseo Knight. He takes that whole dragon-slaying shtick way too seriously.

How do you stay in shape?

Pilates. When you exhale flames it’s really important to control your breathing. Birthday cakes are a real challenge.

What do you do in your spare time?

Rattle windows with my awe-inspiring roar, intimidate cowering opponents, light the night sky with my fearsome flames… you know, dragon stuff. Also, I like to barbeque.

What is your favorite TV show?

“River Monsters” on Animal Planet. It’s nice to see what some of my relatives are up to.

What’s the greatest aspect of being a mascot?

Being a member of all 25 SUNY Cortland athletic teams and supporting the student athletes’ accomplishments.

Name a place that you would like to travel to.

What’s the best part about being from New York?