And Mother Made Two at Commencement 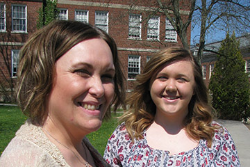 
College students carry all sorts of things to campus with them: laptops, sports equipment and maybe even that favorite childhood teddy bear.

Brianna McAdams brought along her mother.

“She actually talked me into going back to school,” said McAdams’ mom, Pamela Overbaugh of Cortland, N.Y. “I was really reluctant but she supported me.”

On Saturday, May 14, during the afternoon Commencement ceremony in the Park Center Alumni Arena, McAdams’ and Overbaugh’s journey together culminated in a double celebration. Both accepted their bachelor’s degrees — McAdams’ in geographic information systems with a minor in geology, her mother’s in psychology.

Their unusual SUNY Cortland partnership makes sense. Although they did it at different times, both parent and child attended elementary school in Dryden, N.Y., graduated from Cortland High School and attended the same community college.

“It is a great school that offers my major close to home,” said McAdams, a track and tennis athlete and National Honor Society student in high school. Both a resident assistant and teaching assistant during her two-and-a-half years at Cortland, McAdams received an Outstanding Leader Award, made the President’s and Dean’s lists, served as president of the co-educational service fraternity Alpha Phi Omega and participated in Geology Club.

Meanwhile, Overbaugh's graduation milestone bridged what for her was a scary, 20-year gap stretching back to when she received an associate’s degree in human services from Tompkins Cortland Community College (TC3). She halted her education to work and raise children. Her youngest daughter will graduate from high school later this year.

In Spring 2013, McAdams, having taken mainly liberal arts and sciences courses at TC3, enrolled at SUNY Cortland. Her mother accepted the challenge the following fall.

They even studied introductory biology and western civilization together.

“That was interesting,” her mother said. “We were lab partners and Brianna showed me how to use a microscope. That was helpful.”

Because the pair had different curriculums, most of the campus community was unaware of their family connection.

“The lab instructor, (biological sciences lecturer) Noelle Relles, found out and thought it was funny,” McAdams said. “She asked if we competed.”

For Overbaugh, technology was by far the biggest challenge she faced in pursuing her education in classes filled with 20-something students.

“I don’t know how to type and I had to learn how to use a computer fluently,” Overbaugh said.

She credits a psychology associate professor, Melvyn King, with smoothing her path to completing the necessary introductory computer course for the field. And, like many people who are occasionally puzzled by today’s technology, she asked her daughter for help.

“Brianna’s better than me in math and computers,” Overbaugh said. “It’s a great skill to have.”

Brianna wanted a real college experience, so she lived in an off-campus apartment for a few years.

“I’d give her a ride and then we’ll walk up the hill together,” Overbaugh said of her daughter.

Although the College enrolls many non-traditional undergraduates — defined as students who are at least 24 years old or who have experienced a break in their education since high school — everyone looked quite young to Overbaugh. She did her best to keep up with a younger class cohort, pulling her share of near all-nighters to finish her classwork.

“My husband, Harold, picked up the slack,” Overbaugh said. “He does the shopping, picks up the kids.

“I believe if you work hard enough you can accomplish going back to college,” she said. “But it is a true commitment, I will say.”