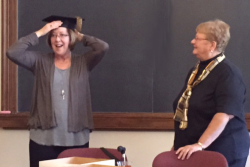 
When she marches in procession at the next Commencement or Academic Convocation, SUNY Cortland Professor of Health Donna M. Videto will proudly display a mortarboard with a distinctive lineage in her profession.

Videto joined a nearly 70-year-old tradition in October when she was passed down the mortarboard originally worn by Delbert Oberteuffer, a professor at Ohio State University who was a respected leader in the health education field.

Oberteuffer’s concept of the totality of the person — “Man in Function … Man in Total” — that was developed in the 1960s is generally credited with being one of the first philosophical contributions to the profession’s literature to foster an understanding of the importance of holistic health in health promotion.

Videto was the third college academician to receive this distinction. She was presented the ceremonial cap directly from Becky J. Smith, who received the mortarboard in the 1980s and for 26 years was executive director of the American Association for Health Education (an organization later folded in to SHAPE America). Smith also served as vice president of the American Alliance for Health, Physical Education, Recreation and Dance.

Smith passed along the classic, square brimmed cap-and-tassel headgear during a surprise afternoon ceremony in the Moffett Center Poskanzer Conference Room. She is shown in the above photo on the left trying on the hat while Smith looks on.

“I was told that it was a reception for Becky J. Smith,” Videto recounted. “I was very surprised to realize that I was being honored.

“When you get something like the mortarboard, you start to feel like all of the hard work, dedication and efforts were recognized,” Videto said. “I was honored and grateful for that recognition.”

The legendary mortarboard from the 1930s originally was passed by Oberteuffer, when he retired, into the care of Ann E. Nolte, his doctoral student and protege.

Nolte, the first female professor elevated to the rank of University Professor at Illinois State University, received national recognition for her leadership roles in the university’s health program. She also was associate director of the nationally recognized School Health Education Study, which from 1964 to 1972 laid the basis in nearly every state for the development of legislation mandating health education in schools.

“I think that the fact that the mortarboard has been worn by three individuals that have been such real leaders in our profession, whose names are so well known and who represent such a rich history in health education, is incredible and an amazing gift,” Videto said.

“The Oberteuffer mortarboard is just one of what may be hundreds of artifacts of the health education profession that should be preserved as a part of our history,” Smith explained.

Videto — as the mortarboard’s newest guardian — is a 20-year SUNY Cortland faculty member who is a successful textbook author and grant writer. A professional health educator since 1979, she has conducted more than 80 presentations or poster sessions at state, district and national level professional gatherings.

Smith noted that Videto has received some of the field’s highest recognitions, including a presidential citation for contributions to the profession from the American Association for Health Education and the State University of New York Chancellor’s Award for Excellence in Faculty Service. The State of New York Association for Health, Physical Education, Recreation and Dance recognized her for outstanding contributions and commitment to professional excellence.

“It is with great humbleness that I ask Dr. Videto to carry on the tradition of wearing the Oberteuffer mortarboard at graduations and other academic occasions,” Smith said.

“I asked her to continue the tradition of choosing and passing the mortarboard, along with its history, to another nationally known leader in the health education and promotion field when she retires from active university participation,” Smith said.

Such traditions have an important place in academia, said Smith, who in recent years proudly wore the mortarboard at Cleveland State University academic ceremonies, as a visiting faculty member.

“It was during that time that I truly appreciated the special gift I had been given and the importance of carrying forth our professional history through artifacts, journals, books and what we call ‘grey literature,’ which are the many documents prepared for special programs and conferences,” Smith said.

According to her, saving the artifacts and history of the profession serves multiple purposes.

“It will become a rich environment for research by graduate students and professionals alike,” she said. “Knowledge of our history can inspire our students, our teachers, and our future leaders by letting them know what has been and most importantly — what can be.”