Did Mosquitoes Kill the Dinosaurs? 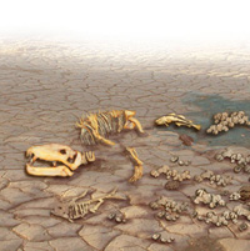 
The concept that dinosaurs may have met their demise through an insect-born disease is one of two topics open for debate following a screening of “Nova Science Now” segments at SUNY Cortland on Tuesday, April 3.

Three local paleontologists will offer perspectives on the science behind the “Nova Science Now” segments and lead an open discussion following the viewing of the popular Public Broadcasting System’s science show. A 15-minute screening of “Dinosaur Plague” will begin at 7 p.m. in Sperry Center, Room 105. A second 15-minute screening of “Mass Extinction” will follow, also with commentary from the local experts and a question-and-answer period. The event is free and open to the public.

• Warren Allmon, director of the Paleontological Research Institution and its Museum of the Earth in Ithaca, N.Y., and the Hunter R. Rawlings III Professor of Paleontology at Cornell University;

• Christopher McRoberts, professor of geology at SUNY Cortland; and,

• Robert Ross, associate director for outreach at the Paleontological Research Institution. “Evidence of the largest mass extinction occurred before dinosaurs even existed, during the Permian period 250 million years ago, when 95 percent of all animal life became extinct,” McRoberts said. “The second “Nova” screening presents how big changes in the ocean and atmosphere were triggered by giant volcanic eruptions. We’ll talk about the science behind that extinction.”

“Nova Science Now” airs at 9 p.m. on Wednesdays on the Public Broadcasting System and is broadcast locally by WSKG Public TV.