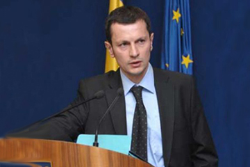 
A Romanian professor of political science will explore a currently hot topic on whether the process of developing democratic citizens through migration has worked well in Europe on Tuesday, Sept. 6, at SUNY Cortland.

Gabriel Badescu, a faculty member at Babes-Bolyai University (UBB) in Cluj-Napoca, Romania, who also directs the institution’s Center for Democratic Studies, will discuss “Does Immigration Increase the Quality of Democracy? A Study of Migrants in Europe” at 4:30 p.m. in Sperry Center, Room 104.

Organized by the International Studies Program and the Clark Center for International Education, the talk is free and open to the public.

Badescu will bring a uniquely European perspective on a subject of research that governments around the world would be eager to find out. The future of many European political systems, leadership and their open or closed-door policies toward immigration could hinge on what decisions are made on this matter.

Badescu’s lecture will examine the relationships between cultural diversity and political culture. Using survey data collected from Romanian migrants in Italy and Spain as well as survey data on Romanians who returned to their home country, the study evaluates predictors of pro-democratic attitudes among this population.

He has held a Fulbright post-doctoral research fellowship at University of Maryland, College Park. Badescu was presented with an international fellowship from the Open Society Institute. He has received many awards for his scholarship. He is the author or co-author of many books related to his scholarship, including Social Capital and Public Participation (Bucuresti: Tritonic Press, 2013).

Between 2009 and 2010, Badescu coordinated the Romanian Agency for Governmental Strategies. He also chaired UBB’s Political Science Department from 2003 to 2015. Since 2005, he has directed the Center for the Study of Democracy.

This event is supported by the Project on Eastern and Central Europe (PECE) and the Political Science Department.

For more information, contact Alexandru Balas, assistant professor of international studies, coordinator of the International Studies Program and director of the Clark Center for International Education, at 607-753-4823 or alexandru.balas@cortland.edu.