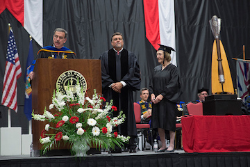 
Two SUNY Cortland alumni whose careers have touched people across the globe in very different ways will receive honorary doctoral degrees from the State University of New York during SUNY Cortland’s Undergraduate Commencement ceremonies on Saturday, May 12.

Scott A. Williams ’82 is executive producer and lead writer for “NCIS,” one of the most-watched television shows on the planet. He is also the co-founder of Shane’s Inspiration, an organization that promotes inclusion for children with disabilities that has built 64 inclusive playgrounds throughout the world.

Therese Sullivan Caccavale ’75 was an international leader in the field of early foreign language education and immersion who has helped shape the foreign language curricula of schools throughout the United States and beyond. Hers is the first honorary degree SUNY Cortland will award posthumously.

“We are extremely proud of both of these accomplished alumni,” President Erik J. Bitterbaum said. “Scott’s talent and drive have not only entertained the world, but improved the lives of children with disabilities across the planet. Therese’s work has lived beyond her passing earlier this year and continues to influence untold numbers of lives.”

After graduating from SUNY Cortland in 1982 with a degree in English, Williams began writing scripts for television crime dramas, breathing life into characters for a long list of popular shows that included “NYPD Blue,” “Castle,” “The District,” Bones,” “Brooklyn South,” “Third Watch,” “Crossing Jordan” and “Without a Trace.”

In 2003, he joined “NCIS” as a writer, becoming executive producer in 2015. “NCIS,” which chronicles a fictional group of special agents the Naval Criminal Investigative Service, airs in 66 countries and draws more than 50 million viewers each week. It is the longest-running, scripted non-animated show on primetime television.

In 1997, Williams and his wife, Catherine, suffered through the death of their first child, Shane, who was born with spinal muscular atrophy. They channeled their grief into the creation of Shane’s Inspiration, a nonprofit dedicated to creating inclusive community playgrounds that has changed the lives of thousands of families in communities ranging from Sun Valley, California to Bangalore, India. The organization also helps communities make recreational facilities more accessible and offers programming to help children without disabilities learn how to play with children who have special needs.

Over the course of a 38-year career teaching foreign language in the Holliston Public Schools in Massachusetts, Caccavale received numerous honors, including the most prestigious honor in her field, France’s Chevalier of the Ordre des Palmes Academiques, an academic “knighthood” earned in 1999.

After graduating from SUNY Cortland in 1975 with majors in French and childhood education, she earned a master’s degree at Middlebury College and then won a Fulbright Scholarship to earn an advanced degree from the L’Université de Franche-Comté in France.

Caccavale passed away on March 5, 2017, and is being given an honorary SUNY degree of Doctor of Humane Letters posthumously.