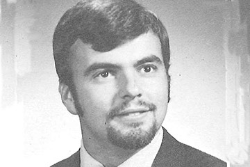 On the same page, artist and poet Kahlil Gibran is quoted: “Shall the day of parting be the day of gathering. And shall it be said that my eve was in truth my dawn?”

Phelps’ celebrating classmates couldn’t forsee the parting his family would endure two years later when the former physics major and his crew disappeared along with their F4 Phantom jet during the Vietnam War.

Nor could they have predicted this terrible loss would — 45 years later — yield a gathering and a measure of dawn for Phelps' remaining family members and admirers who will finally, formally acknowledge his loss.

Friends and remaining relatives have worked diligently with veterans groups to finally honor Phelps’ memory and say a last goodbye. A dedication/memorial service is planned at 1 p.m. Saturday, May 21 — which is Armed Forces Day — at St. Mary’s Cemetery in Cortland. All are welcome to attend, including alumni and members of the campus community.

After graduation, Phelps joined the Air Force and was serving as a weapons and systems operator on the jet flying night missions over Laos. On Nov. 23, 1971, his plane was shot down. Phelps’ remains and those of the pilot, Capt. Robert Altus, never were found.

For seven years, Phelps was listed as missing in action (MIA). When military officials declared Phelps killed in action (KIA) Aug. 16, 1978, in the absence of any remains his family could not accept his death. Having lost their only son, Phelps’ parents were devastated and never held a funeral or memorial service.

Both parents are now deceased. Phelps’ father endowed a Cortland College Foundation scholarship named in memory of his son. Over the years, the award has helped offset the cost of graduate school for generations of matriculated SUNY Cortland physics students or those who earned degrees in chemistry, biological sciences and geology.

An Air Force color guard will march at the ceremony and a musician will play taps. A priest will officiate. Mementos of the soldier will be on hand, including his memorial plaque, his medals encased in a shadow box, his military picture and an image of the kind of aircraft on which he flew.

In addition Phelps’ extended family members, the local veteran’s organization Warriors of the Cross spearheaded the effort to have the official military plaque made and placed at the family cemetery plot.