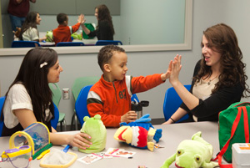 
After more than 40 years, the public services in speech and hearing disorder diagnosis and therapy that area residents continue to appreciate have moved to a new building on the SUNY Cortland campus.

This spring, the College’s Communications Disorders and Sciences Department moved from its long-time home in the McDonald Building on Tompkins Street into the newly opened Professional Studies Building.

The department has brought along its Center for Speech and Hearing Disorders, which it has operated through the years as a training ground for future clinical practitioners in speech and hearing disorders.

The new building occupies the existing parking area and part of the lawn on the east side of the former Studio West, off Pashley Drive.

Clients will be very pleased when they arrive at the center’s new facilities, notable for state-of-the-art treatment rooms and evaluation laboratories and located nearby Tompkins Street, noted department Chair Regina Grantham, who oversees the center.

The facility is primarily an academic building. Classrooms are located elsewhere in the Professional Studies Building and department offices are tucked conveniently and discretely upstairs from clinical rooms.

When visiting the center, individuals can seek services by parking in a lot reserved just for clinic clientele and entering a first-floor reception area. The public’s dealings continue to be private, confidential and well removed from the hustle and bustle of a college campus.

The clinic includes an audiology chamber, observation and therapy rooms, labs, a library and a resource area with tables for study, project preparation and student meetings.

Mary Emm, a lecturer at the College, continues to direct the clinic. Deborah Wilson, an instructor, remains as assistant clinic director. Grantham, Emm and Wilson are speech language pathologists. Michael Pitcher, a lecturer and audiologist, still provides hearing services as the audiology coordinator.

About 15 students work individually with about 25 clients per academic year. Five others work primarily with student groups.

“The students are working with the clients, and they are providing evaluation and therapy, under the constant supervision of a licensed speech pathologist,” Emm said. “They come once or twice a week, typically two times a week, for the semester for their class, Clinical Practice II.

“Each of the therapy rooms is paired with an observation room, since the students are primarily the clinicians,” Grantham noted. “Their experience as student clinicians is always supervised by a licensed and certified speech and language pathologist. There’s room for parents, whom we invite to attend the sessions in order to become more involved.”

One new clinical space features a full kitchen with a working stove and is geared to working with adults who are recovering from an illness or injury that has affected their daily living skills.

“For a person with aphasia, cognitive disability, this is functional, hands-on therapy for them,” Grantham said. “Doing something like following a recipe helps them in dealing with problem-solving their way though tasks that involve understanding, remembering, attending: language is part of what we call ‘cognitive skills.’”

“In its new facilities, the center is ideally situated for the future growth in number of student clinicians that are being trained and adult clients served,” Emm said.

Sessions there may be recorded, using state-of-the-art digital recording equipment, for later study by the student clinician alone, for the sake of confidentiality, Emm noted.

The training is all part of the practical work these future specialists are required to complete in order to earn a bachelor’s degree, Grantham noted. Those enrolled in an educational track complete a mandatory semester of student teaching in two actual school districts. Whether enrolled in the Speech and Language Disabilities (SLD) track or the Speech and Hearing Science (SHS) track, students are preparing themselves for admission to a master’s degree program in speech-language pathology or audiology, something SUNY Cortland aspires to offer eventually.

Additionally, the SLD major leads to Initial Certification as a Teacher of Students with Speech and Language Disability (TSSLD) in New York State, Grantham noted.

“Several students take part in offering speech improvement groups in the community, such as in public schools,” Emm said. “That’s not a part of the clinic but an example of what we do in the community.

“Whether they are providing services in-house or out in the community, they are always supervised by a licensed speech pathologist,” she said.

Typically there are 240 speech screenings in the community per year, usually with preschools and Head Start, Emm said.

The center has served the local community since 1968, originally from the basement of what was then the new Fine Arts Building on campus and is now the Dowd Center.

In 1960, the College acquired a stately Victorian-era mansion as the James M. McDonald Infirmary, according to the Cortland College: An Illustrated History, by Emeritus Professor of History Leonard F. Ralston.

The infirmary moved to a campus facility in the mid-1960s, making way for the clinic.

Raymond Howard Hackworth was hired in 1968 to chair what was then called the Speech and Theatre Arts Department, Hackworth wrote in a 2007 letter to Grantham. He had been charged with establishing a state-certified academic program of speech pathology at SUNY Cortland.

“The program resided, with a deserved level of autonomy, within the department of Speech and Theatre Arts, existing as a ‘compartment within a department,’” Hackworth describes.

In 1975, Hackworth was permitted to make use of the empty McDonald building for a clinic, and obtained state funding for the modest remodeling necessary to open what he described as a “magnificent” clinic. As the eventual department chair, Hackworth hired a succession of clinical supervisors during his 10-year term of administration, starting with Judith Kelemen in 1970, an educator and associate director who made great strides with the program before her untimely death after three years.