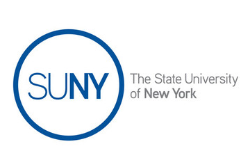 
Two SUNY Cortland faculty members were appointed to the rank of Distinguished Faculty by the SUNY Board of Trustees.

Andrew Fitz-Gibbon, a member of the Philosophy Department, has been named a Distinguished Service Professor. This title is conferred upon individuals who have given sustained outstanding service to the campus, SUNY, the community, the state of New York or the nation.

Randi Storch, a member of the History Department, has been named a Distinguished Teaching Professor. This title is given to those who have demonstrated consistent superior mastery of teaching, service to students and commitment to ongoing intellectual growth and scholarship.

The appointment of a Distinguished, Service or Teaching Professor represents a rank promotion over that of professor.

Fitz-Gibbon’s academic area of focus includes ethics, peace and social justice with an overarching emphasis on the philosophy of loving non-violence. His expertise in the classroom and his commitment to these ideals outside of it have set him apart from his peers.

The author of 15 books and numerous articles, chapters and reviews, Fitz-Gibbon, who has chaired the Philosophy Department since 2012, is recognized widely for his scholarly expertise. He has served as president of the Association of Concerned Philosophers for Peace, the leading professional organization in North America dedicated to the causes of war and prospects for peace. He is a fellow of both the American Philosophical Practitioners Association and the Royal Society of Arts of Great Britain.

“Fitz-Gibbon’s books and essays have had a very significant impact on the field,” said Andrew Fiala, professor of philosophy and director of the Ethics Center at California State University, Fresno. “His scholarly work appears in excellent presses (Rodopi, Brill, Palgrave) and important venues. He has worked tirelessly as an editor for books in this area. And his expertise is well known and respected among scholars. He is a frequent contributor to scholarly conferences and serves as an informal advisor to scholars such as myself.”

In addition to his academic work, Fitz-Gibbon is the co-founder, along with his wife, Jane Hall Fitz-Gibbon, of the Lindisfarne Community in Ithaca, N.Y. He has applied his commitment to service by caring for more than 100 foster children. Fitz-Gibbon has taught workshops on foster parenting for Cortland County caseworkers and has worked with agencies at the state and local level to better train foster parents and adopters.

Fitz-Gibbon has been a leader on the SUNY Cortland campus since he arrived in 2004. He served on the Institutional Review Board from 2005 to 2001, designed and led the Summer Ethics Institute from 2006 to 2018 and has directed the Center for Ethics, Peace and Social Justice since 2007. Fitz-Gibbon has served on more than 20 department and university committees and has chaired the Faculty Senate Academic Faculty Affairs Committee and served as representative to the Cortland Faculty Senate Steering Committee since 2010.

His personal commitment to health and wellness has helped many of his peers. Fitz-Gibbon, a certified advanced senior Tai Chi instructor, has taught regular Tai Chi classes for faculty members. He has led many book talks for the Faculty Development Committee as well.

Fitz-Gibbon earned his B.A. in business studies at the University of Central Lancashire, England, in 1981. He has an M.Litt. in history, an M.A. in applied theology and a Ph.D. in social ethics from Newcastle University.

A remarkable historian, scholar and researcher, Storch, chair of the History Department since 2010, truly excels as an educator and instructor. She has taught more than 16 different courses, taking students into the field and helping bring history to life through innovative methods of engagement, including debates, role play and mock trials.

Storch has taught on topics including an introductory Raquette Lake field experience class, American labor and working class history, issues in women’s history as well as a digital history course on the history of SUNY Cortland. She has taught large lecture courses as well as writing-intensive seminars for both undergraduates and graduate students. Storch worked to create and lead four National Endowment for the Humanities summer institutes that used locations including Raquette Lake, New York City and Cortland and were aimed at helping K-12 teachers better serve their students. The summer institute grants totaled more than $700,000 and will aid teachers of history for years to come.

In addition to teaching, Storch works closely with the History Club, attending meetings and events and has established History in Progress sessions, in which faculty share research with students. Her dedication to students is reflected in their evaluations of Storch’s teaching. One student said, “Professor Storch never failed to have my full attention beginning to end of class. It was like a performance every time and she completely sucked me in with every topic. She is by far the most intriguing professor I have had at SUNY Cortland.”

Storch is committed to integrating technology and digital history into the classroom. She has taught digital mapping, served on a Digital Humanities group and created and taught a course on SUNY Cortland’s history as part of the university’s sesquicentennial.

One observer of the course noted, “This class was innovative and clearly had engaged the students not only in the work of historians but in the conceptualizing of what historians do. I was very impressed both with the concept of the course and with the depth of the students’ thinking as they discussed the project. Storch’s teaching during this session was remarkable.”

Storch has developed a writing guide for history students, which has served many students. Her emphasis on writing effectively and working with students to help them organize their thoughts and make arguments has benefited students both during class and long after their time at Cortland.

Her efforts to connect with students during office hours have led to a supportive environment for students, especially those who may be hesitant about history. The encouragement provided to students by Storch, while maintaining a commitment of excellent student performance, has led to students discovering and unlocking their own passions and skills.

Said one student, “Your love and passion for history made me love and appreciate it more than I ever had in my entire life. I came in dreading the fact I was being ‘forced’ to take a history course and the first day of learning it was clear this was going to be one of my favorite courses and has proven to be. It has been a pleasure.”

The author of Working Hard for the American Dream: Workers and their Unions, World War I to Present (2013) and Red Chicago: American Communism at its Grassroots 1928 to 1935 (2007), Storch is an accomplished scholar who has drawn praise from other historians. She has also authored numerous journal articles, book chapters, book reviews and encyclopedia entries.