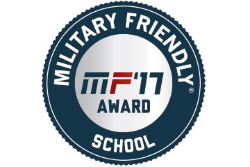 
SUNY Cortland has been helping military veterans pursue higher education since the end of World War II, when thousands of returning soldiers supported by the GI Bill packed classrooms of what was then a state teacher’s college.

Today, men and women who served their country continue to earn degrees at the College in an even wider range of academic disciplines. SUNY Cortland helped produce America’s first female four-star Army general, the former head of the Army’s military performance division and the current commander of the U.S. Navy’s 20-state Mid-Atlantic Region.

As a result of this ongoing tradition, SUNY Cortland recently was named a 2017 Military Friendly® School by Victory Media, which runs a Website and several ranking programs aimed at helping veterans get employment or a college education.

First published in 2009, the Military Friendly® Schools list is provided to service members and their families to help them select the best college, university or trade school for the education and training needed to pursue a civilian career. Likewise the publisher surveys employers to create a job resource listing for veterans.

“SUNY Cortland is very honored to be considered a military-friendly school,” said SUNY Cortland President Erik J. Bitterbaum. “The recognition validates the challenge we have placed to different offices across the campus to help our military veterans come back to college or come to college for the first time. We’ve invested time and effort in making sure our veterans can realize their educational goals and dreams.”

The Admissions office will display a plaque marking the College’s official status as being a Military Friendly® School.

The Military Friendly® Schools list is created each year based on extensive research using public data for more than 8,800 schools nationwide. It also includes input from student veterans and responses to the voluntary Military Friendly® Schools survey completed by participating institutions. More than 1,700 schools participated in the 2017 survey and 1,273 were awarded with the designation. More information is available at MilitaryFriendly.com.

The College is ranked among public universities with fewer than 10,000 enrolled students. The Military Friendly website now includes a SUNY Cortland page with a description of what the College has to offer. It details its long commitment to the armed forces and shares a cost breakdown of tuition and other expenses.

The page also contains a series of graphs that rate areas where SUNY Cortland goes above and beyond in terms of supporting the needs of former service members. These final ratings were determined by combining the institution’s survey scores with an assessment of the institution’s ability to meet thresholds for student retention, graduation, job placement, loan repayment, persistence (degree advancement or transfer) and loan default rates.

The College exceeds the benchmark in the area of academic policies and compliance by 60 percent; admissions and orientation by 36 percent; culture and commitment by 33 percent; and military student support and retention by 13 percent. Financial aid, graduation rate and career readiness also are strong areas for the College.

“Our ability to apply a clear, consistent standard to the majority of colleges gives veterans a comprehensive view of which schools are striving to provide the best opportunities and conditions for our nation’s student veterans,” said Daniel Nichols, a Navy Reserve veteran and chief product officer at Victory Media.

“Military Friendly® helps military families make the best use of the Post-9/11 GI Bill and other federal benefits while allowing us to further our goal of assisting them in finding success in their chosen career fields.”

The survey questions, methodology, criteria and weightings were developed by Victory Media with the assistance of an independent research firm and an advisory council of educators and employers. Ernst & Young independently evaluated data calculations and tabulations for completeness and accuracy. The survey is administered for free and is open to all post-secondary schools that wish to participate.

Founded in 2001, Victory Media is a service-disabled, veteran-owned small business (SDVOSB) that connects the military community to civilian employment, educational and entrepreneurial opportunities through several publications. Learn more about Victory Media at http://www.victorymedia.com.