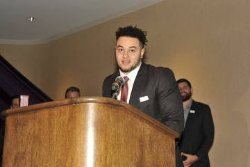 
SUNY Chancellor Kristina M. Johnson will be joined by dozens of prominent leaders from academia, government, business and philanthropic organizations during her inauguration ceremony on Friday, Sept. 14.

She has also invited one student to represent the more than 600,000 currently enrolled in the SUNY system to participate in the event: SUNY Cortland senior Kyle Richard.

Richard and a friend stopped a sexual assault in progress during a party on Long Island during the summer of 2017. After chasing the assailant outside, Richard was shot twice, once in each leg. Richard, a linebacker and captain of SUNY Cortland’s football team, recovered quickly and missed only one game before returning to the field that fall.

The Biden Foundation awarded Richard with the Biden Courage Award for Bystander Intervention in April. He was also presented with a Next Generation Award from Kristin’s Fund, which was established in memory of Kristin Palumbo Longo, who was murdered by her husband in 2009 in Deerfield, N.Y.

“Kyle Richard is a role model for us all,” said Johnson. “When suddenly confronted with a dangerous situation he had the courage to save a person from unspeakable harm — and he did so at risk to his own life. We are proud of Kyle, not only for his heroic efforts, but also for his willingness to share his story as a way to build awareness to stop sexual assault. My congratulations to him.”

Johnson will be inaugurated as SUNY’s 13th chancellor at the Morris W. and Fannie B. Haft Theatre at the Fashion Institute of Technology. A live stream will be available online starting at 10 a.m.

She served as the dean of the Pratt School of Engineering at Duke University from 1999 to 2007 and was provost and senior vice president for Academic Affairs at Johns Hopkins University from 2007 to 2009. Johnson was under secretary of Energy at the U.S. Dept. of Energy from 2009 to 2010 and is co-founder and CEO of Cube Hydro Partners, LLC, a clean energy infrastructure company.