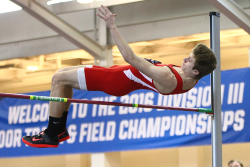 
SUNY Cortland graduate student Brent DiVittorio of Brewster, N.Y., has been selected as a Division III Men's Track and Field/Cross Country Academic All-American for the 2019-20 season by the College Sports Information Directors of America (CoSIDA).

During the indoor track and field season this past winter, DiVittorio earned All-America and All-Atlantic Region honors and was the SUNYAC champion in the 60-meter hurdles. He ranked fifth nationally in Division III with a time of 8.06 seconds — just a hundredth of a second off the school record. The NCAA indoor championships, along with the entire outdoor season, was canceled due to the COVID-19 pandemic.

DiVittorio was previously a three-time national qualifier and all-region performer in the indoor heptathlon (2016-18). He earned All-America honors in the event with a seventh-place finish in 2017 and was also SUNYAC champion and an all-region performer that year. In addition, DiVittorio was the outdoors SUNYAC decathlon champion and an all-region honoree in 2017 and was part of Cortland's winning 4x100-meter relay at the 2019 SUNYAC outdoor championship.