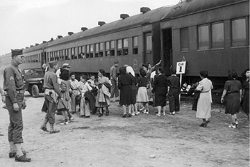 
During World War II, 9-year-old Sam Mihara and his family were forced to leave their home in San Francisco and were imprisoned in an internment camp in Wyoming for the duration of the war.

Mihara will discuss his life before and after the Japanese attack on Pearl Harbor and the government’s treatment of more than 120,000 Japanese-Americans during this tumultuous time, on Wednesday, April 20, during three presentations on the SUNY Cortland campus and in the community.

Presented by the Teacher Professional Development Network housed within the College’s School of Education and the McGraw Central School District, his talks, titled “Memories of Heart Mountain,” all are free and open to the public.

The first talk, from 9:30 to 11:30 a.m. in Old Main Brown Auditorium, is aimed at middle and high school students but campus and community members are welcome.

The second, from 12:30 to 1:30 p.m. in Brockway Hall Jacobus Lounge, targets members of the campus and community.

The third, which begins at 7 p.m. at McGraw Junior-Senior High School, is open to anyone. Bus service from campus will be available for students to attend the talk. The bus will depart from the stop in front of Moffett Center at 6:15 p.m. and will return to campus at approximately 9 p.m.