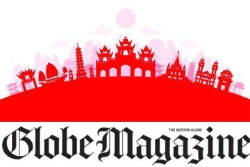 
SUNY Cortland first-year student Isabella Bonapace wrote an essay, “My Hanoi Mothers,” that was published in the The Boston Globe Magazine on Nov. 29.

Bonapace shared the story of how she traveled to Vietnam at age 16 with her adoptive mother. She met the midwife who had delivered her and a woman who had cared for her as an infant. The journey helped her to replace her “otherness with oneness.”