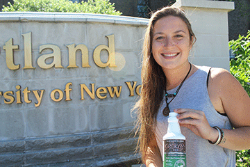 
As a student, Liz Ingalls ’16 had her eyes on the heady world of corporate finance.

Ingalls, who grew up in Centerport, N.Y., had worked summers on Long Island as an administrative assistant for a major investment company. Upon graduation, she was poised to stride in suit and heels into her first real job at the same corporation.

But first, the former business economics major took what was supposed to be a quick trip to New Zealand to indulge an interest in agriculture that had simmered since childhood, when she would help in the family garden. Ingalls’ experience on organic farms, as a traveler through the international WWOOF (Worldwide Opportunities in Organic Farming) program, ended up changing the course of her life.

She now goes to work in shorts and Teva sandals as an organic entrepreneur determined to change the world — and make a decent living — through earthworms.

Earthworm poop, to be exact.

Ingalls is the creator, CEO and workforce behind Growers LLC, a company that raises the creatures in the phylum Annelida on Long Island in order to make and market earth-friendly fertilizer made out of worm excrement — known as “castings” to the polite and squeamish.

“This was for kicks,” Ingalls said of her career-altering journey. “I wanted to learn something to just kind of get in touch with my roots a bit, see how New Zealand did things. Then I went full-blown hippie.

“I really enjoyed the farming side of things. I came across an earthworm farm and I was very intrigued.

“I learned how farming with worm fertilizer could be profitable for myself and profitable for the world,” she said. “The farmer had a huge glasshouse that had tomatoes that were the best in the world, bigger than anything I had ever seen.”

Ingalls, who as a student was perhaps best known for her four seasons of standout women’s lacrosse goalie work, never had a problem shoving her hands into the soil, whatever it might conceal.

Ingalls started Growers, currently housed on a friend-of-a-friend’s patch of ground near her current home in Huntington, N.Y., in May 2017. She cleared the overgrown plot by herself. By November it was a limited liability corporation.

“If people know what I’m doing and are interested in learning, I’m going to be offering a course,” Ingalls said, handing out a business card that shows her company’s name spelled out in squiggly nightcrawlers lying on a bed of soil.

A year into her New Zealand adventure, Ingalls relocated to Malaysia and continued her extended travels abroad by volunteering to work with a man who made liquid earthworm fertilizer for the government. He became her organic farming mentor.

“When I came home, if I ever had questions I could call him or send him a message on Facebook,” she said. “One thing about these countries is that no knowledge is knowledge for themselves, it’s to be shared.”

In Malaysia, Ingalls paid her bills by teaching English to children living in The Rainforest Treehouse, a school that taught sustainable living lessons such as how to live in tree forts made of living materials, cook in cast iron pots over wood fires and walk barefoot in the woods listening to nature.

“I’ve taken the formula I learned in Malaysia and enhanced it to work well in this area,” she said of her particular recipe for fertilizer. Ingalls’ process of making the fertilizer involves adding water and minerals to the worm castings in a barrel. The mixture then is allowed to ferment and is then bottled. Before it is sold, a company in Ithaca tests the fertilizer to ensure the product is consistent.

Ingalls’ finished product concentrates the liquid black gold in a 16-ounce bottle that she sells as “premium liquid worm casting fertilizer, environmentally and consciously produced with diligence.” The result can be used on both indoor and outdoor plants. It will take roughly five gallons of Growers liquid fertilizer to cover one acre. So a 10,000 square foot lawn will need approximately 1.25 gallons of the product.

In her planned in-person classes on how to set up one’s own worm farm, she plans to share her innovative approach to separating the slithery, writhing creatures from their castings.

“If it catches enough attention I will set up virtual lessons,” she said.

Ingalls said she works with European giant crawlers that produce exponentially more and much bigger larvae, rather than the indigenous North American species she calls “red wigglers.” If you tried to dig them out of the ground to start your own business, you’ll never get enough of them, she advised. Buy in quantity instead and breed your own.

“Once you buy five hundred to a thousand, they reproduce themselves,” she said. “You start them in your house and move them outside.”

Raising the earthworms can be done in a garden bed dug up about two feet deep and roughly the size of a small garage. Hers now contains an estimated 80,000 nightcrawlers.

She’s developed her own process of luring the worms to higher ground to excrete their waste and, when they’ve returned to their feeding area, letting natural rainwater push the castings together where they can be collected.

Taking up much more space than her worm bed are side-by-side demonstration gardens, one sowed with produce grown with a non-organic fertilizer and the other with the Growers LLC formula.

Ingalls said she started the business with just $30 in her bank account.

“A lot of people that liked my idea let me use their recycled goods,” she said. “It’s just me doing everything right now.”

Ingalls is not afraid of the daunting effort needed to build a business, having labored and saved every chance she had since age 14.

“When I got to college, I was working 10-15 hours a week on top of lacrosse,” she said. “I’ve always wanted to run my own business. I want to run a nonprofit some day and this is just the first step.”

The Long Islander’s embrace of sustainable agriculture seems unlikely in light of the suburban world in which she was raised.

“We all have common roots as people,” Ingalls explained. “I’ve actually realized recently what got me interested in farming was that, growing up on Long Island, my grandparents had a horse. And I remember being so excited when I would wake up in the morning and my grandfather and I would go out and feed the horse.”

“When I was in second grade, after school I used to go garden with the secretary of our school,” she said. “She was a very good gardener.”

Ingalls later helped in her own family’s small backyard and also lent a hand on the home turf of their neighbor, Billy Joel’s mom, Roz.

“She was a very particular woman, Roz, but she was great. Her backyard was huge, absolutely filled with flowers.”

Ingalls is glad to be turning her former interest in horticulture into a career that could help save humanity.

“It really can change the country. The main idea is there’s an increasing population rate and people cannot keep up with the demand for food. We can stop relying on imports for food if we can be self-sustainable for the country. We need to think about the fossil fuels we are putting into the earth. We need to think about the bigger picture and this is just the beginning.”