On the air with William Dickerson ’69 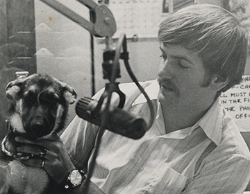 
William “Bill” Dickerson ’69 wanted all the typical things of retirement.

Upon retiring in 2011 as executive director of the auxiliary services corporation at California State University, Fullerton, Dickerson wanted to spend more time with his grandchildren.

With his wife, Maura Feeney Dickerson ’71, M ’74, Dickerson planned to shuttle between their winter residence in California and their summer home in New York state’s Adirondacks region, where they had long owned a summer camp near Dickerson’s childhood home of Willsboro, N.Y.

But Dickerson — the first SUNY Cortland student to pick up the microphone when students started the campus radio station now known as WSUC-FM 90.5 — also had a dream: to manage and host his own classic rock radio program.

Ultimately, that drive is why Dickerson, at a time in his life when peers are spending long hours on the golf course, is bucking national business trends as owner and operator of WNBZ 106.3 FM, an independent radio station serving Plattsburgh, Saranac Lake, Lake Placid and the Champlain Valley region.

Every weekday between 1 and 6 p.m. you can hear Dickerson online or over the airwaves.

When he’s not cheerfully pitching an upcoming North Country event or service or product, Dickerson’s easy voice bookends each song with a wealth of insider’s details that would do the late American Top 40 disc jockey, music historian and radio personality Casey Kasem proud.

“I derive a great deal of pleasure about musically oriented things where you are relating information to people most of which you believe they would like to hear,” Dickerson said. “I don’t think of myself as an entertainer but I do believe when I open the mic on the radio I’m doing my best to say something my listeners may find interesting.”

But pursuing the dream hasn’t been easy.

Although Dickerson, as a new Cal State Fullerton retiree, had no trouble landing a seven-months-of-the-year job as a DJ with an online station in California, filling the five months at the other end of his snowbird cycle was a problem. Gigs in the Adirondack area of upstate New York are rare, and Dickerson’s back-and-forth trips to Fullerton, Calif., made getting and keeping them difficult.

In 2014, for example, he landed one summer job with 101theONE (WCTV/WEXP) in Vermont, which was “only” an hour and a half away from his home near Lake Champlain, including the ferry trip from New York.

“I definitely loved it,” Dickerson said. “I came back the next summer and they had filled my position while I was in California. They said they could have me back but just as a part-time fill-in.”

Jobs are becoming fewer as many music-oriented radio stations have let their disc jockeys go and adopted a computer managed, all-music-and-ads format, he lamented. All he could find were occasional fill-in gigs at Hometown Radio WIRY 1340 AM and 100.7 FM in Plattsburgh, N.Y.

Soon, Dickerson realized that the best way to guarantee himself airtime was to become the owner and hire himself as a D.J. He joined with Amanda Dagley, then the station manager at WIRY, and the business partners set out to acquire their own radio station where they could call the shots.

They soon found a station that was up for sale. They signed a purchase agreement and launched  WNBZ 106.3 FM, rebranded “The New Broadcasting Zenith.”

Since February 2018, the station has broadcast Dickerson’s brand of rock-and-roll music during his “Afternoons are Better with Bill” program. Gradually, the station is becoming part of the fabric of the far-flung Adirondack community.

Recently Dickerson gave introductory remarks before a concert at the Strand Center Theatre in Plattsburgh,N.Y., by A.J. Croce, the son of the late, fabled singer and songwriter Jim Croce.

“I’m basically telling them about upcoming shows at the theatre,” he said. “I love doing that sort of thing.”

Blast from the Past

With his latest undertaking, Dickerson frequently taps his SUNY Cortland experience, during which he helped bring a new radio station to campus in 1967.

“When I was a freshman, I saw a sign on a bulletin board that said something like, ‘Do you like top 40 music?’ and underneath, ‘Would you like to help start a radio station?’” he said. “The House of Delegates, which was what the Student Government Association was called at the time, had allocated $10,000 to start up the radio station.

“I had always had a love for radio,” Dickerson said. He recalled when the station, originally called WCSU Cortland, went on the air in April 1967. The original staff included students Sue Hall Seefried ’68, the first station manager, and Jim Little, the station engineer. Dickerson was scheduled to do the station’s very first broadcast, a radio show Saturday nights.

But a week or so before the launch date, he was invited to take a weekend trip with classmates to the Poconos.

“I decided to have my cake and eat it too,” Dickerson said. “So what I did was I went to the downtown Cortland station WKRT (K-LOVE 89.3 FM) and recorded the first three hours of that seven hour shift. Jim Little played the three-hour show that Saturday night and I was down in the Poconos.”

Then, when he was a junior, the former recreation education major met his future wife at a Lusk Field House mixer. It  featured a band that included the late Cortland-born musician Ronnie James Dio, who went on to become a heavy metal music icon, perhaps best known as the lead singer for Black Sabbath.

He frequently introduced big-name concert acts, including Neil Diamond, The Hollies, The Temptations, Frankie Valli and the Four Seasons, Procol Harum, Martha and the Vandellas, The Buckinghams, The Lettermen, The Guess Who, The Association, Don McLean, the Grateful Dead and Wilbert Harrison.

After graduation, Dickerson accepted a job as assistant director of Corey Union to stay close to Maura as she finished her degree. His junior year role as student manager at Brockway Hall had prepared him for that, he said. Working for Student Affairs, but also as a SUNY Cortland graduate student, Dickerson continued to broadcast and produce shows through 1971, when he left to manage a college campus student center and auxiliary services at William Paterson University in Wayne, N.J., which he held for 17 years until 1988.

His professional duties at William Paterson led him to advise the students’ concert committee. Starting in 1980, he also produced and hosted a local television program called “High School Bowl,” which involved a tournament among high school students at 40 different schools to bring back the most money in sponsored scholarships to their districts.

“I had the opportunity to host that the first two years and be the producer of it,” Dickerson said. “I found it was very restrictive, but at the same time, it rekindled my interestin radio. So I put together a demo tape and in 1980 I got hired.”

Fullerton lured him away to the job he held until his retirement. The only thing missing from those years for him was having his own radio show.

“The part I love is being on the air,” Dickerson said. “I truly enjoy communicating with the audience, with trying to present interesting material. A combination of good music but also with enough background and supplemental information that listeners will find that it’s not the type of thing they can get any more on most radio stations.”

What Dickerson doesn’t love in the radio field, and is working to address, is the business end of things. He wants to hire more sales people so he can really live part of the year in California rather than the temporary arrangement of visiting the state occasionally while he and the staff keep 106.3 WNBZ going.

“The obvious question is, ‘Is this a lifelong dream, to own and operate your own radio station?’” Dickerson said. “I’d have to say, ‘No, not really.’ Because, let me be very clear, it’s a business. Like any other, so there’s expenses that have to be met.”

This summer, Dickerson will buy Nielsen ratings data to learn how many listeners the station has attracted since it went on the air in the new classic hits with DJ commentary format more than a year ago. The station previously ran rock and roll classics on computerized autopilot, without a DJ.

“When I have a person on the phone, I tell them to have all their friends listen to 106.3 WNBZ, for that better variety of music that you love,” Dickerson said. “People 9 out of 10 times the next words out of their mouth are ‘oh, we love your station.’ That’s encouraging and that’s what we want. We’re trying to get everyone listening to our station.”

While attending his recent 50th reunion at Alumni Reunion 2019, Dickerson gave remarks at the Class of 1969 Dinner and the Musical Legacy Commemorative Project: 1960-1990 Sculpture Unveiling.

A longtime Cortland College Foundation board member, the North Country’s new radio personality left the board as his new venture took up more and more of his time. The College remains dear to him, however.

“The reason for that is very simply, I credit Cortland with any degree of success I might have ever attained since then, because of those opportunities for student leadership as an undergraduate,” Dickerson said.