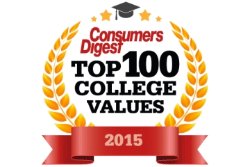 
Consumers Digest has named SUNY Cortland as one of the nation’s 50 “best values” among public colleges and universities, recognizing the institution as a leader in providing affordable, high-quality education.

SUNY Cortland ranked 41 among the 50 top-value public higher education institutions throughout the United States listed in the magazine’s June edition.

The list was part of a special report, “The Price of Admission: How to Make a College Education More Affordable,” that balanced the total annual cost of attending hundreds of different public schools with the quality of the education students received at each. Consumers Digest determined quality through a formula that included graduation and retention rates, student/faculty ratio and the high school grades of first-year students.

“Excellence and access are among SUNY Cortland’s most important priorities,” College President Erik J. Bitterbaum said. “It is truly gratifying to be included in a national ranking focused on the value that institutions provide for what hard-working families are asked to pay.

“For nearly a century and a half, Cortland educators have been changing the lives of smart, ambitious students of modest means. We’ve been able to accomplish that by using our resources wisely and putting our students at the center of all that we do.”

And SUNY Cortland may be even a better deal than the Consumers Digest survey suggests.

Consumers Digest, which has been evaluating products and services for more than half a century, used out-of-state-resident tuition rates – which are higher than the tuition rates SUNY asks New York state residents to pay – in its cost comparison.

That is a very conservative estimate of SUNY Cortland’s cost since the vast majority of SUNY Cortland students pay the lower, in-state tuition rate. Out-of-state residents, meanwhile, are eligible for SUNY Cortland’s unique Future New Yorker Grant, in which the College makes up most of the difference in tuition cost.

“We have taken innovative steps to make a high-quality SUNY Cortland education affordable to students from all 50 states and beyond,” Bitterbaum said.