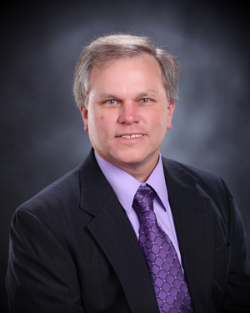 
Steven Broyles, a professor of biological sciences at SUNY Cortland, has been named the College’s ninth recipient of the Rozanne M. Brooks Dedicated Teacher Award. He will be recognized formally on Thursday, May 3, during the College’s annual Excellence in Teaching, Research and Service Reception.

The Brooks Award honors a faculty member who devotes a significant amount of time both to teaching and to working with students outside of class. The award includes a $5,000 honorarium to enhance the recipient’s teaching initiatives.

Broyles said he will use the Brooks Award stipend to buy specialized photographic equipment to capture images of miniscule objects as well as equipment with sensors that will be used in the field to monitor the activity of animals and insects that have been tagged with dabs of paint.

The Brooks Award was endowed through the generosity of the late Rozanne Marie Brooks, a SUNY Distinguished Teaching Professor and SUNY Cortland professor emerita of sociology and anthropology, and her former students, friends and colleagues. A SUNY Cortland faculty member for 36 years, Brooks died in 1997. The first award was presented in spring 1998.

Broyles’ teaching record made him an excellent candidate.

“His enthusiastic teaching style in front of his classes and his devotion to offering students a wide array of learning experiences outside of the classroom epitomize the intent of Dr. Brooks’s concept of an award to recognize faculty ‘who are outstanding teachers in the classroom, who spend considerable time with students and (who) are very student oriented,’” said Distinguished Professor of Biological Sciences Timothy Baroni, a former Brooks Award recipient who was speaking on behalf of the Selection Committee. “His infectious excitement for exploring the living world around us allows him to fully engage his students in an indoor classroom or in an outdoor laboratory.”

Broyles’ teaching philosophy is that “science is exciting and should be taught enthusiastically.”

“There is no single prescription of success that ties together all the classes that I teach,” Broyles commented. “Students in my Biological Sciences I class require a scientifically rigorous course that prepares them for more challenging biology classes, thinking like a scientist and understanding basic principles that tie together all the biological courses. In contrast, students in Field Natural History come from the disciplines of childhood education and programs in recreation, parks and leisure studies. This population deserves experiences in the outdoors that are authentic and hands on. They need the hands-on field experiences and information that permits them to overcome fears and explore nature with a scientific background.”

Nevertheless, all students must be engaged and mentally active in the classroom, he asserted.

“This is encouraged by active participation in lectures, occasional demonstrations and small group discussions.”

Colleagues and former students offered their insights on Broyles as a teacher.

“He is devoted particularly to working with students outside the typical classroom setting,” said R. Lawrence Klotz, a distinguished teaching professor of biological sciences who nominated Broyles for the recognition.

For approximately 18 years, Broyles has put aside his personal and professional aspirations to conduct the Field Biology course in August at the College’s Environmental and Outdoor Educational Center at Raquette Lake, according to Klotz. Even in his early years on the faculty, Broyles declined to take regular semester release time to which he was entitled as compensation for the summer commitment.

“The energy and enthusiasm required for a faculty member to teach the (Field Biology course), especially for three weeks as Dr. Broyles did for many years, is extraordinary,” said Klotz. Once, a student fell gravely ill while at Raquette Lake and Broyles drove the young woman home to her family in Cortland before returning to teach class early the next morning. The student, meanwhile, underwent emergency surgery.

“Teaching and being responsible for 20 students in the wilds of the Adirondacks is a major commitment,” Klotz noted.

Klotz credits Broyles’ ability to perceive each student as a unique individual.

“Once he has this connection with each student showing his commitment, he can then challenge them to excel in the class,” Klotz said.

Over the years, Broyles also has taken his students on Neotropical Biology field trips to Costa Rica and Belize and on other special field trips. Currently his students are engaged in a service learning experience that involves studying the number, location and health of trees in Cortland and Homer, N.Y. He has advised the Biology Club for many years and organized the annual reception for graduating seniors after Commencement and served on the City of Cortland Water Board.

Several students wrote letters supporting the nomination. One student, who earned a Bachelor of Science in Biological Science at SUNY Cortland and also is finishing a Master of Arts in Teaching for Biology at her alma mater, praised her academic adviser for exhibiting “not only an extensive knowledge of biological sciences but a great passion as well.”

“I was able to learn from his expertise and present at SUNY Cortland’s Scholars’ Day two years in a row,” wrote the student, Sarah Smith of Chittenango, N.Y. “I was complimented on my knowledge and presentation skills and I give Dr. Broyles 100 percent credit for his ability to teach and prepare his students. I could not have done this without his help and support. I now have experience that I will be able to share with my students as a teacher.”

A member of the SUNY Cortland faculty since 1992, Broyles joined as an assistant professor and was promoted to associate professor in 1997 and to professor in 2004. He also teaches Ornithology, Introduction to Environmental Studies, Economy and Ecology of Belize, Biology of Trees, Integrated Earth and Life Sciences, and Conservation Biology Seminar.

A Midwest native, Broyles has a Bachelor of Science in Biology from the University of North Carolina at Charlotte; and both a Master of Science and a doctorate in Botany from University of Georgia. His dissertation, “The Reproductive Biology of Poke Milkweed, Asclepias exaltata L.: Population Structure, Mating Patterns, Pollen Dispersal and the Evolution of Inflorescence Size, was recognized by the university with the Sigma Xi Outstanding Ph.D. Dissertation Award in 1993. The university presented him with its Outstanding Graduate Teaching Award in 1990 and its Outstanding Teaching Award in 1992.

The Botanical Society of America presented Broyles with its 1991 Margaret Menzel Award for Outstanding Paper in Plant Genetics. The Conference of Southern Graduate Schools awarded him its 1990 Outstanding Thesis Award in Natural Sciences and Mathematics. In 1989, he was recognized by the Association of Southeastern Biologists both for best student paper in ecology and for student research. He was inducted into the interdisciplinary honor society Phi Kappa Phi and the Blue Key National Honor Fraternity. In 2002, the State University of New York honored Broyles with its Chancellor’s Award for Excellence in Teaching.

Broyles has taken part in numerous college committees and currently advises the Biology Club. He has served since 2005 as an Appeals Board justice of the College’s Judicial Affairs Office.

He is married to Susan Sherman-Broyles, a research associate at Cornell University. The couple lives in Cortland. They have two sons, Christopher, currently a sophomore at Methodist University, and Cory, a Cortland High School senior who is headed to American University in the fall.