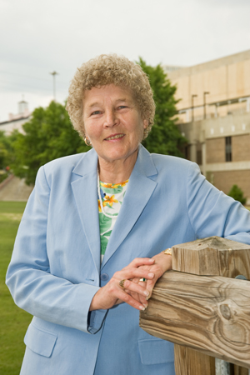 Rink, who has played a leading role in the development of physical education standards and assessments for schools across the United States, will deliver the Commencement address at both the 9:30 a.m. and 2:30 p.m. ceremonies on Saturday, May 18.

“Her work has positively touched the lives of millions of children and young people,” President Erik J. Bitterbaum said. “Few people have done more to help transform the art of teaching physical education into a highly respected and critically important profession.”

Since graduating from SUNY Cortland in 1965 with a physical education degree, Rink has taught every age group, from kindergarten pupils to doctoral candidates. She has led cutting-edge research and wrote scores of insightful reports that reflect the academic excellence, healthy decision-making and transformational education valued by SUNY Cortland.

Over the course of a 44-year career, Rink authored 75 academic papers, seven books and numerous professional journal articles in the fields of physical education pedagogy and assessment, teacher accountability and the maintenance of active lifestyles. She earned a Master of Science in Physical Education from the University of North Carolina at Greensboro and a doctorate from Ohio State University. Her work remains widely used in physical education classes nationwide and continues to shape the way teachers work with children.

As a project leader for the National Standards for Physical Education, Rink helped establish goals and standards by which the fitness of American children could be assessed and improved. She directed the South Carolina Education Assessment Program, which created a comprehensive framework for evaluation that New York has used as a model.

Her efforts to align physical education curricula with state and national standards have influenced education programs at the local, state and national levels. She has presented at major professional conferences in Hong Kong, Trinidad and Tobago, United Arab Emirates and throughout the United States.

In 1988 Rink, a former SUNY Cortland gymnast, was inducted into the C-Club Hall of Fame in recognition of her leadership and professional accomplishment. In 2010 the SUNY Cortland Alumni Association recognized her as a Distinguished Alumna, its highest honor.

“Judith Rink exemplifies the College’s institutional priorities and serves as a living example of how SUNY Cortland graduates can successfully follow their career dreams and make a lasting difference in the world,” Bitterbaum said regarding SUNY’s decision to awarded her the honorary degree of Doctor of Humane Letters.

“We are proud to call her one of our own, and honored to have her on campus as we bid farewell to the graduating class of 2013.”