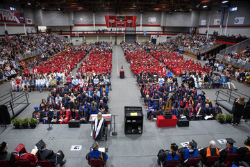 
SUNY Cortland’s Commencement in May was a major life milestone for the more than 1,000 students who earned diplomas.

It was also a significant moment of reflection for the parents, grandparents, siblings and friends who cheered on the graduates.

William Proefriedt of Farmingdale, N.Y., penned a letter to Newsday about watching his grandson Josh Finkelstein ‘19 at Commencement.

“When I graduated from college in the 1950s, I was the first in my family to do so,” Proefriedt wrote. “My father had graduated from high school and my mother from eighth grade. I didn’t appreciate then how important my graduation ceremony was to my parents. I’m sure there was a healthy percentage of parents and grandparents in the audience at Cortland whose pride and enthusiasm were fueled a bit more warmly by a child being the family’s first to receive a degree.”

Read the entire letter at Newsday.com.