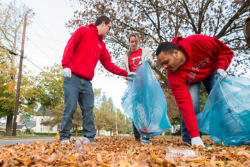 
When Ashlee Prewitt ’14 started planning a student-led community service event more than a year ago, the initial goal was to round up 100 volunteers. When eight more eager SUNY Cortland students joined her cause in the fall, she thought a goal of 300 volunteers was attainable.

With two weeks to go until SUNY Cortland’s Big Event, a one-day volunteer project slated for Saturday, May 2, more than 400 volunteers — most of them students — have pre-registered.

“I couldn’t be more pleased,” said Prewitt, who completed her bachelor’s degree in political science in December and will pursue a master’s in public administration at Binghamton University in the fall. “This just shows how committed to the community SUNY Cortland students can be.”

The potentially far-reaching project is relatively simple: a day of service built on the concept of strength in numbers, to be held on the same day as the Cortland Downtown Partnership’s annual community clean-up.

“The idea behind the Big Event is that we can fold in any service project that students do,” Prewitt said. “It’s not necessarily about giving goods to the community, it’s about providing services.

“Instead of donating money or food, we’re saying: ‘What can we do for you?’”

Those jobs will include outdoor painting, trash and brush haul, mulching and gardening, hedge trimming or shoveling and raking. The Big Event is supported by $10,000 in funding from SUNY Cortland’s Student Government Association, funds that will be used to purchase supplies and equipment.

Prewitt said the maximum 50 pre-registered job sites already have been filled. Volunteers still can sign up, although all of the event’s allotted free t-shirts have been accounted for. All volunteers still will receive free continental breakfast and bus transportation to job sites in exchange for four hours of their time. They will meet at Park Center Alumni Arena at 9 a.m. for service assignments and a short kick-off ceremony featuring remarks from College President Erik J. Bitterbaum and Cortland Prevention Resources Executive Director Kimberly McRae Friedman ’97.

“So many different student clubs and organizations stepped up,” said Prewitt, noting that SUNY Cortland’s Greek organizations alone are expected to produce more than 150 volunteers.

She attributed the success to the grassroots, word-of-mouth type efforts that the event’s student recruitment executives began during the fall semester. The idea for the Big Event itself was born more than a year ago, when Prewitt interned in SUNY Cortland’s Research and Sponsored Programs Office. Her goal was to find a project within the community to which she could contribute.

“I thought there could be more direct overlap between students and residents,” she said.

When she arrived in Cortland three years ago from the Midwest, Prewitt quickly learned about SUNY Cortland’s annual Cortaca Jug football game, the College’s biggest sports rivalry, and its Spring Fling concert, a marquee social event. She thought the area needed a community service event capable of rising to the same level.

“Looking at the College’s Institute for Civic Engagement and service learning program, there’s a lot of evidence that students have the initiative to give back,” said Prewitt, who transferred to Tompkins Cortland Community College (TC3) then to SUNY Cortland from the University of Oklahoma, where a similar event took place in Norman, Okla. “The question became: how can we give high visibility to that initiative?”

Texas A&M University came up with the concept of the Big Event more than 30 years ago. There’s no national organization or governing structure for the Big Event, although dozens of colleges and universities across the nation have followed through with similar days of service.

The president of the College’s Non-Traditional Student Organization (NTSO), Prewitt enlisted the resources of the group that exists for undergraduates who are at least 24 years old or have had an interruption or delay in their education since high school. Big Event organizers have received endorsements and support from the NTSO, the College’s Institute for Civic Engagement and government officials in the City of Cortland.

“Obviously, we still have to do the work,” she said. “But right now, a lot of it is logistics, and that’s a pretty good feeling.”