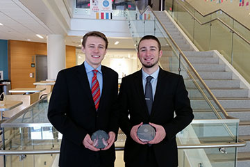 
You don’t have to be wearing an athletic jersey to bring home a trophy for SUNY Cortland. Political science majors Matthew Mavrogian and Michael Braun recently did it while wearing jackets and ties.

The pair made up SUNY Cortland’s most successful moot court team at the American Collegiate Moot Court Competition regional tournament in Fitchburg, Mass., on Nov. 18 and 19, reaching a new milestone under third-year faculty advisor Timothy Delaune.

Mavrogian, a junior from Huntington, N.Y., and Braun, a senior from Elmont, N.Y., who also is president of the Student Government Association, made it to the Saturday, Nov. 19, elimination rounds and won their first round of that competition before being eliminated, said Delaune, assistant professor of political science and the College’s pre-law advisor.

“They consequently received trophies, the first time that any SUNY Cortland team has advanced this far since the reboot of the program in 2014,” Delaune said.

Moot Court simulates oral arguments before the U.S. Supreme Court. Two-person legal teams spend the semester working through a hypothetical lower-court case raising substantial constitutional issues, and argue those issues — supported by legal precedent — in competition with students from schools around the country.

“It taught us all what it would actually be like to be a lawyer, or at least the closest thing to it,” said Mavrogian. “This is a great program that holds students to a higher level of problem solving, complex text analysis and is an interesting and fun way to learn the law.”

“Being able to prevail and move on to the next round was truly a feeling of accomplishment," Braun said. Moot Court was an extraordinary experience."

Moot court actually is a political science course, POL 489, offered at SUNY Cortland in the fall semester for three credit hours and is open to students in any major of at least junior status. The course gives students a chance to hone their public speaking and analytical skills while arguing a case that has, or could have, appeared before the U.S. Supreme Court. They are in charge of preparing arguments for both sides, based on real-life cases cited in the competition brief.

“I am not set on being a lawyer, but this class definitely gave me a good understanding of the amount of work a lawyer puts into a case,” Mavrogian said. “I would highly recommend it to any student who is serious about going to law school because this class will give you the best undergrad experience in law-related topics.”

Mavrogian appreciated the real-life perspective the competition brings to an otherwise classroom experience.

“My favorite aspect of the course was public speaking,” he said. “We can all read and write. However, it was a challenge to then stand in front of judges and articulate what we have learned while getting questions thrown at us left and right. A lot of the judges’ questions forced us to think on our feet, and Professor Delaune did a great job preparing us for it.”

A second SUNY Cortland moot court team of political science majors, junior Kayla Ernisse of Rochester, N.Y., and senior Tyler Savino of Holtsville, N.Y., gave consistently strong performances in the preliminary rounds on Friday but did not compete on Saturday.

“They performed admirably in the opening rounds of 42 teams, but regrettably did not make the cut to the single-elimination rounds,” Delaune said.

"Matt, Kayla, Tyler and I worked extremely hard to prepare for the competition," Braun said. "Professor Delaune made sure to properly prepare us for what was to come. We were lucky to have such a dedicated professor on our side."

Delaune became the course’s new instructor after a two-year hiatus during which the elective wasn’t offered. That first year, he took a team to the regional tournament in Massachusetts. Four SUNY Cortland teams competed, but none progressed to the second-day single elimination round. In Fall 2015, one team advanced to the single-elimination round on Saturday. Unfortunately, the pair was eliminated in the day’s first round on a split decision and the win was awarded to the higher-seeded team.

Everything about the class leads up to that final day in court, making it a valuable experience for SUNY Cortland students who aspire to become attorneys or go into another field that uses strong reasoning and oral presentation skills.

“I am especially pleased that in an important and contentious election year, in which voting rights were very much at issue, our moot court students have gained vital knowledge regarding those rights and their constitutional underpinnings,” Delaune said.

The team’s trip was supported by The President’s Fund and the Dean of Arts and Sciences Office.

“I liked that we could meet students from all over the East coast and compete against them,” Mavrogian said. “It really gave us a sense of pride to be able to represent SUNY Cortland.”

"Although I am unsure if I would like to go to law school, moot court has showed me that I would be able to do it if I tried," Braun said. "Moot court truly gave me optimism in the possibility of having a future in law.”