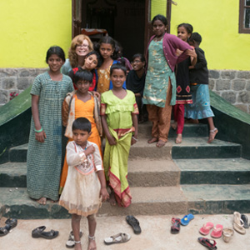 
The first time Jena Nicols Curtis visited India in 2008, the SUNY Cortland associate professor of health promised herself that she never would return.

For Curtis, a well-traveled health educator, the sights around her seemed almost too much to comprehend: toddlers picking through towering garbage piles for food, children working dangerous construction jobs on roadsides, entire families living in cramped storage garages without windows.

“There was just so much to do and I had no sense how I could even start to address those things,” said Curtis, who made the initial trip as a guest of the International School Association of India to assist in the development of AIDS teaching curriculums. “Then I got out and I did what I tell my students to do, which is to reflect on the experience and try to make sense of it.”

The odyssey inspired a three-week pilot study this summer in which Curtis and senior community health major Nicole Miller considered and compared the specific health needs of orphans in India’s rural and urban areas. Their work, in turn, laid the foundation for an award-winning project that will take up to 10 SUNY Cortland undergraduate students to Indian orphanages in the summer of 2015.

Six years and three trips after her initial journey, Curtis is the recipient of SUNY Chancellor’s Award for Internationalization for a proposal that will rely on undergraduate field research to investigate physical and emotional health in two locations in India. The project is one of four selected to receive the $4,000 award from among a SUNY-wide pool of applications.

The purpose of the honor is to offer students new academic experiences abroad. Curtis said the College will use all of the funding to defray student costs for the trip.

“This is the sort of experience that everyone should be able to have, regardless of financial background,” she said.

If Curtis’ most recent research work with Miller serves as an indicator, future trips should prove transformative for both for Indian children and the College students. Curtis recalls an old expression, often repeated in India, that asks the best way to eat an elephant. The answer? One bite at a time.

Along those lines, future SUNY Cortland groups will target smaller projects that look to make a collective impact in Mangalore, a coastal city with a population similar to Boston’s, and in Kodaikanal, a much more rural area in the mountains of southern India with a population closer to that of the city of Cortland.

“Instead of doing what we refer to as drive-by research, where you go in, you do something and you never come back again, we’re going to have a sustained presence in these two places,” Curtis said. “So we’ll be able to see: here’s what it was like when we started, here’s what it’s like now and here’s the journey we still have.”

When they started, Curtis and Miller performed what’s known as a needs assessment to determine the physical and emotional health of the Indian children. They arrived knowing that the term orphan carries slightly different meanings in the two places. In the city of Mangalore, orphans are children whose parents have died. In Kodaikanal, however, they are tribal children separated by a four-hour walk from their families for 11 months out of the year. Their parents opt to give them up because orphans receive adequate food, medicine and shelter at a children’s home, and that is something many parents are unable to provide while living in the hill country without running water or electricity.

As is the case with many worthwhile research projects, the SUNY Cortland pair discovered things they hadn’t expected.

“We went in there thinking we were going to see all these very sick children and help all of these people,” said Miller, who hopes to continue on to nursing school after graduation. “When we got there, they were happy, they were laughing and they were healthy for the most part.

“I learned there’s a lot more to research than what you can anticipate.”

In both locations, many of the orphans showed irreversible signs of malnourishment from when they were babies. Their physical health today, however, is relatively good. The orphans in the city benefit from a relationship with St. Aloysius College, a Jesuit institution in Mangalore. A local doctor manages the children’s home in rural Kodaikanal.

A closer look at the children, particularly those in the hill country, showed that there’s plenty of work that can be done to improve their well being. The effects of encroachment and squatting on their land, in addition to excessive amounts of trash and broken glass, were noticeable, Curtis said. So was the children’s emotional state when asked about their parents far away.

“Really, what these tribal children need in addition to space and a place to be children is someone to address the health of their families long-term.”

Adults die relatively young in the tribal lands, many times of treatable illnesses, Curtis said. A high rate of heart disease also exists. Usually, the only communication tribal children receive is emergency-related news about their families.

“On the outside, they’re happy and healthy,” Miller said. “But what do you do for a kid who only receives a phone call when someone dies?”

Eventually, Curtis hopes to build enough trust with the tribal people to improve the physical and emotional health of entire families. The first bite of the elephant this summer, however, likely will involve physical work such as clearing garbage and painting projects in the hills and delivering necessary supplies to the city. More needs assessments also will make up the research components of the trips, Curtis said.

She’s targeting eight to 10 students from any discipline for this summer’s trip. Although the SUNY Chancellor’s Award for Internationalization offers funding for just one year, the India program will become a regular offering through SUNY Cortland’s International Programs Office.

“I realized I needed to bring more students back, not just because it would be life changing for them, but because watching the children interact with Nicole gave me a whole level of information I couldn’t get any other way,” Curtis said.

In Kodaikanal, the tribal children referred to Miller as “sister” and Curtis as “auntie.” And in Mangalore, they embraced the SUNY Cortland researchers in the same way. Curtis recalled a simple game that Miller played with the city orphans, where she would say an English word and they would point to the object. When she said “shoe,” for instance, they would point to their feet.

When she said “family,” a young boy reached his arms as wide as he could and wrapped them around several other children.

“That was very powerful,” Curtis said. “I knew at that moment, ‘There are some things we can help with, and these kids are going to be OK.’

“And hopefully each summer, we’ll be able to take another bite out of the elephant.”