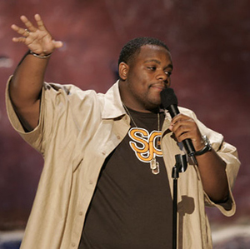 Sponsored by the Student Activities Board, the comedy show will begin at 8 p.m. in Corey Union Function Room and is free and open to the public.

In 2001, Jordan was recognized by Uptown Comedy Corner in Atlanta, Ga., and crowned its “Rookie of the Year.” He has since shared the stage with comedians Dave Chappelle, Rickey Smiley, Bruce Bruce, Earthquake, Mike Epps and Arnez J.

The crowd favorite at the Miller Lite King and Queens of Comedy Search Tour, Jordan has served as an opening act for the Queens of Comedy 12-city tour featuring famed female comedians Sommore, Monique and Adelle Givens. He also has starred on the Crown Royal Comedy Soul Fest Tour featuring rhythm and blues music legends Earth, Wind and Fire, and the Isley Brothers.

For more information, contact Mary Kate Boland, the assistant director of leadership and community development, at (607) 753-2034.