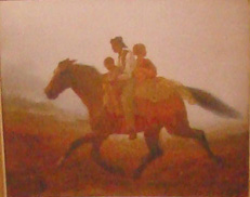 
This year’s celebration of Black History Month at SUNY Cortland will have the distinct flavor of the underground railroad that is so closely interwoven with New York state’s history.

At Memorial Library, members of the campus community and public will have an opportunity see the National Abolition Hall of Fame and Museum’s “Traveling Abolition Museum” exhibit on display in Memorial Library lobby areas through the month of February.

The library exhibit, “Abolishing the Chains of Slavery: Central New Yorkers to the Rescue,” traces the clash between slavery interests and the abolition movement in the 1830-1870 period. It is on loan from the Peterboro, N.Y., hall of fame and museum.

These and the many other Black History Month educational and cultural events at the College are free and open to the public, unless otherwise noted.

An opening ceremony for “Abolishing the Chains” will take place from 3 to 4 p.m. Wednesday, Feb. 1, on the Memorial Library’s second floor. Seth Asumah, a SUNY Distinguished Teaching Professor of political science and chair of SUNY Cortland’s Africana Studies Department, will offer remarks at the ceremony.

“Abolishing the Chains” is comprised of eight freestanding display panels that depict — in pictures and text — the people, documents and events that shaped the slavery-abolition conflict up to and after the Civil War.

Most of the panels are near the second-floor recreational reading area, but some are on the first-floor lobby near the Library Commons and Teaching Materials Center areas. The library also will display documents and artifacts relating to modern slavery or human trafficking and highlighting black history resources. The materials, showcased in the main lobby to the right, were supplied by College faculty members.

Sernett developed the “Abolishing the Chains” panels. A scholar on African American religious history and the abolition movement, among other areas, Sernett has authored the noted anthology African American Religious History (1999), and the more recent North Star Country (2002) and Harriet Tubman: Myth, Memory and History (2007).

Snead, a performing historical re-enactor, lecturer and storyteller from Rochester, N.Y., will present “Re-enacting a Historical Figure (Rev. Jermain W. Loguen)” at 4 p.m. on Thursday, Feb. 16, in Brockway Hall Jacobus Lounge. He also will perform a sample of the many aspects of his re-enactment of Loguen, and then will discuss the research and preparation he does to become the historical character for presentations. A question-and-answer session will be included.

At 7 p.m. in Sperry Center, Room 205, Snead will perform “Escaped Slave and Now Rev. Jermain W. Loguen Visits Cortland.” Snead offered this re-enactment during the 2011 Induction Ceremonies for Rev. Loguen at the National Abolition Hall of Fame and Museum.

“This is exactly the kind of thing we want the Friends of the Library to sponsor, because libraries are really part of the cultural fabric of the country and our communities,” said Library Director Gail Wood.

“And because we are part of the College, we are educators, too,” she said. “Black History Month is a great opportunity for us to provide more information on how upstate New York and Central New York provided support for the abolition movement.”

“Jermain Loguen became a powerful voice for abolition and for human rights in Central New York,” said Associate Librarian David Ritchie, organizer of the library events, about the planned re-enactment.

An escaped slave, Loguen first learned to read and write in Canada, and then became a pastor and eventually a bishop in the AME Zion Church in Syracuse, according to Ritchie. Loguen and his wife provided a much-publicized stop at his home for slaves making their way to Canada and freedom on the underground railroad. The abolitionist also helped engineer the 1851 “Jerry Rescue” of a captured escaped slave. He made an early documented visit to the village of Cortland to tell his story at both the Presbyterian and Baptist Churches.

“Snead will de-construct his process of becoming a historical figure, which might be of interest to performing arts majors or teacher education majors,” Ritchie said.

Wood, a quilter, will sew together several quilt squares for one display that shares a more controversial aspect of the Underground Railroad history: whether or not slaves had used the artwork to communicate with others about what to expect along their road to freedom.

“Some people think that many of the quilts made during the Civil War era were made by slaves,” Wood said. “Blocks on the quilt were messages, like the hobo languages: a pictogram language that tells people who are moving around the country what they can expect. The quilt blocks could give warnings, show places they might eat or stay.”

Other historians have argued that examples or such quilts can’t be found, aren’t pictured in needlework magazines of the day, and slaves were not given access to quilting materials, Wood said.