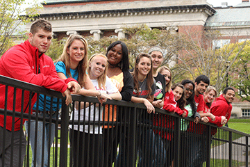 The Title IX coordinator oversees efforts to comply with and carry out the federal law intended to fight sex discrimination, which in its most extreme form includes sexual assault.

Wetter previously served since 2018 as Title IX deputy coordinator in the Division of Legal Affairs at Ithaca College. From October 2017, she had fulfilled the role part-time while still working in Ithaca College’s Office of Residential Life and Judicial Affairs.

At Ithaca College, Wetter served on the Sexual Violence Prevention Committee and the Bringing in the Bystander action group. She also created an affirmative consent workshop. Wetter was serving as deputy coordinator when the Ithaca College Title IX Office received the 2019 Jay Van Volkinburg Award from the college’s Office of Public Safety for its efforts with Title IX reports and investigations.

A member of the Association of Title IX Administrators, she has received certifications in Title IX compliance, due process, investigations and case management. She also is trained in trauma-informed sexual assault investigations.

In her spare time, she enjoys downtown Ithaca and spending the summers on the water. Wetter also keeps herself busy as a new mother with a 7-month-old baby.