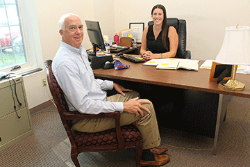 
Why do tourists visit Cortland?

For some it’s the skiing. For others, it’s the scenic hills rolling into the Finger Lakes. Still others come for festivals, athletic contests, celebrations, historical sites, agritourism, dining, entertainment or shopping.

And, although most of them don’t realize it, they come because of Red Dragons.

“She was the first applicant,” the former executive director, Dempsey, recalls. “Then 25 others applied, but we hired her. That makes it extra special, I guess.”

Coming to Cortland is not like coming home, it ishome, Lawton observed. The Cortland native began her college career at SUNY Oswego in communication studies before switching gears and transferring to SUNY Cortland as a junior.

“Growing up in Cortland I always felt a connection,” said Lawton, who graduated from Homer High School. “I enjoyed my time up there in Oswego but it always felt like I should be a Red Dragon.”

She kept her major, however.

“I loved the Communication Studies Department, and by my junior year pretty much all my courses were in communications,” Lawton said.

She concentrated in advertising and public relations. After graduation, she promoted tourism first in the City of Rochester and then as vice president of marketing in Wyoming County through its Chamber of Commerce, which encompasses Letchworth State Park. Until this move, for two years she was vice president of marketing and public relations for Campground Owners of New York, an agency that promotes campgrounds as a place to stay in conjunction with the I Love NY campaign in New York state.

“She’s more than qualified for the position,” Dempsey said.

The CVB operates at 37 Church St. in Cortland and gets it support from the local hotel occupancy tax and state matching funds.

“I’m coming back to Cortland with this new mindset: the potential traveler,” Lawton said. “The thing I love about the tourism industry is you’re always dealing with people on vacation, and who doesn’t love vacations? The job allows me to do that on a daily basis in a concentrated way.

“I’m a big history buff,” she said. “And I love the four seasons. It’s what I like about New York state in particular. Coming back to Cortland with this new mindset is so much fun. We have so much to offer here.”

Dempsey had a bachelor’s degree in English from SUNY Fredonia when he came back to upstate New York from Las Vegas, Nev., in the late 1980s to refocus his career on the recreation field as a student at SUNY Cortland.

“I couldn’t say enough good about the program,” said Dempsey, who learned under such Recreation, Parks and Leisure Studies Department legends as Andy Young, Charles Yaple, Marcia Carlson, Wayne Storman and LaRayne Hesse. He also served two years as a teaching assistant. After graduation with a degree in recreation, he worked at the Syracuse YMCA for four years, continuing to reside in Cortland with his wife, Jan, and their sons, Tom and Andrew. Fate then intervened in the form of his basketball buddy, John Merriman, a CVB board member.

“(Merriman) said, ‘We’ll take a chance on you,’” Dempsey recalled in his understated way. “I think it turned out O.K.,” he said.

After he was hired, Dempsey first worked tirelessly to promote existing attractions: four area ski resorts, numerous golf courses, a plethora of fine dining establishments, many agricultural and cultural fairs and festivals, and an ever-growing number of hotels.

On Dempsey’s watch, the destination potential of Cortland County, a small gem among the wider Finger Lakes region in terms of tourism, has expanded by leaps and bounds. Attractions now include the 1890s House Museum, the Cortland Repertory Theater (CRT), the Lime Hollow Center for the Environment and Culture, the Homer Center for the Arts, the Homeville Museum/CNY Living History Center and the J.M. McDonald Sports Complex. Along the way, the CRT expanded from a summer theater venue to a year-round performing arts operation with two locations and the nearest downhill ski operation grew into a year-round adventure and destination complete with its own hotel and restaurant, Greek Peak and Hope Lake Lodge.

SUNY Cortland’s many cultural and athletic attractions kept Dempsey busy as well, especially during the five years when the New York Jets summer training camp on campus, starting in 2009.

“We worked closely with the Chamber of Commerce to offer visitors’ services to people who would come from out of town just to see the Jets,” Dempsey recalled.

Cortland residents will never see most of the CVB’s ads that draw visitors to the region.

“All of our marketing is external, that is, outside the local area: in adjacent counties and states and up into parts of Canada,” he said. “Based on our research of what kind of experience people might be looking for, we might advertise ourselves to an area, say for example, our skiing attractions, to the metropolitan Philadelphia, D.C., New York, and Baltimore areas.”

“Even a college is a tourist destination,” she said. “They’re in school but they do things while they are here such as ski trips, shopping and visiting restaurants. They’re like tourists who stay here for eight months rather than eight days. You get to tie into all these different arenas and avenues rather than if you look at traditional tourism. But they all tie together.

“That’s one of my goals, to really connect with the campus and encourage those students and visiting faculty, everyone, to really explore what makes Cortland great above and beyond the College itself.”

As for Dempsey, he said Cortland was once a great place to raise their two sons, and is now a fine place to spend in retirement.

“There is so much to see and do here,” he said. “We’ll live here full-time and go away for a month in the winter. It’s been great fun. I’ve been truly blessed.”

Throughout SUNY Cortland’s Sesquicentennial, the College is profiling alumni who have made significant and positive impacts on the local community. For more information on 150 years of SUNY Cortland history, visit cortland.edu/150.