Cortaca Battle is Out for Blood Donations 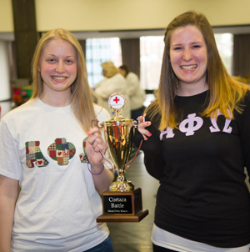 
About two weeks before the football flies in the annual Cortaca Jug game, SUNY Cortland and its longtime gridiron foe Ithaca College will compete for a far less-known but equally blood-thirsty competition: the Cortaca Battle.

On Monday, Nov. 3, and Tuesday, Nov. 4, students from both colleges won’t raise their fists and huddle but will instead roll up their sleeves to continue a two-year-old challenge measured in the crimson liquid volume of donations to the American Red Cross (ARC).

But first, APO volunteers will be out in force drumming up willing donors.

On Friday, Oct. 24, Monday, Oct. 27, and Wednesday, Oct. 29, the fraternity members will staff tables from 5 to 8 p.m. in the Corey Union Snack Bar Hallway to encourage students to schedule giving their pint of hemoglobin and plasma in advance rather than simply showing up on Nov. 3 or 4. APO also posts signs around campus to inform classmates about the competition.

“Sometimes we’ve gotten walk-in donors and, last year, we actually didn’t have enough time for them all,” said Jaclyn DeBouter, this year’s acting president of APO. “We had to say to some walk-ins, ‘Please donate the next time.’”

Of course unscheduled blood givers will gladly be taken both days, but would-be donors have several other ways to plan ahead and avoid a potential wait, according to DeBouter and ARC officials. To book an appointment, call 1-800-REDCROSS, visit www.redcrossblood.org or, new this year, download The Red Cross Blood Donor App at the App Store or on Google Play.

In last year’s Cortaca Battle, SUNY Cortland wrested the winner’s laurels away from Ithaca, which took home the title in 2012, the competition’s first year.

The campuses differ in student population so since 2013, instead of competing on straight numbers, the two colleges have vied to reach the goals each campus sets in advance for reaching a certain percentage of student population donors as well as growing in participation compared to the year before.

In the 2013 competition, SUNY Cortland met its goal and achieved 120 blood donations, an increase of 20 units from the year before, confirmed Sheila Sullivan, customer service representative the ARC Binghamton District. The Red Cross no longer has 2013 records for Ithaca College.

“We said last November we had to get 50 percent of our goal — 50 people on both days — to meet our goal,” explained APO volunteer and senior community health major Cristina Braun of Floral Park, N.Y. “If we didn’t reach our 50 percent goal we didn’t win. That way we didn’t have to worry about getting more donors than Ithaca College.”

“Cortaca Battle was actually an idea the students came up with, which I think is fabulous,” Sullivan said. “It obviously piggybacks with the football rivalry. We get 20 percent of our blood from college students and both colleges participate in a blood drive with us.”

Over the summer the ARC’s Binghamton District created the actual trophy — not a piece of handled crockery as the Cortaca Jug contenders have vied for since 1959 — and presented it to SUNY Cortland to proudly display at least for now.

But the thrill of capturing this trophy is not the only reason the service Greek members organize this annual competition.

“This helps build your empathy level and your leadership and interpersonal skill level,” she said.

Braun also views her community service with APO as a step along her eventual path into a nursing or physician assistant program.

“I like giving back to the community,” Braun said. “It’s just something I’ve always loved to do. I think it’s the same for all members of APO.”

“It shows we’re not just promoting ourselves or the campus but that it’s for a greater good,” said DeBouter, a junior adolescence education: English major from Oakland, N.J. “We’re trying to do as many different things as we can to help a number of people in small ways. It shows what a few people can put together to make something really great happen.”

APO helps organize and run all other campus ARC blood drives throughout the year, through the Division of Student Affairs.

“The day of blood drives is kind of crazy but it’s all rewarding in the end,” Braun said. “We do a lot of work before the event and the day of the blood drive, we all pitch in. The (APO) brothers will come from class or if they’re not doing anything, some of us might just stay the whole day and help out.”

“The kids are great. The kids are energetic,” Sullivan said. “They have the positive, can-do attitude. You mention the needle to kids and the whole tattoo thing (involving needles) is cool to them so they have a much more open mind about the donation process.”

Of all the eligible people to donate, the same 4 percent of the community-at-large gives their blood over and over again, Sullivan noted.

“They’re getting older and older and eventually get to the point where they can’t donate,” Sullivan said. “Perhaps it’s because they’re on medication. So it’s a good thing for the students to learn that it doesn’t hurt and it’s for a good cause. And when they go out into the real world, hopefully they will continue to donate.”