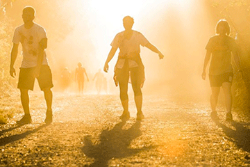 
Carmen Serrano, a Spanish language and culture specialist from University at Albany, will address how vampire and zombie figures have inspired Latin American films since the 1950, on Wednesday, April 3, at SUNY Cortland.

Serrano, an assistant professor of Spanish, will discuss “Newfangled Vampires and Zombies in Latin American Literature and Film” at 4:30 p.m. in Moffett Center, Room 2125.

The talk concludes the College’s 2018-19 Rozanne M. Brooks Lecture Series on the theme of “The Culture of Death,” which explores the anxieties felt in some cultures, contextualizing them in the 21st century Western experience. The series events are free and open to the public.

Serrano will discuss how filmmakers embrace, rival and innovate vampires and zombies that can appeal to national sensibilities.

These entities virtually dismantle national institutions such as the army, the secret service, the police and other organizations important to maintaining a civil society.

These themes underscore how profit-driven national institutions and governments, beholden to ominous masters in a more global and interrelated economy, have also placed the nation and its citizens on a fast-track toward destruction.