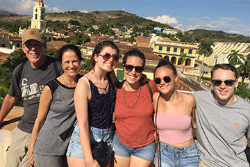 
A fair number of American college students travel to a Caribbean island over spring break. But not many of those include the Communist-controlled island nation of Cuba on their itinerary.

This spring, four SUNY Cortland students and their counterparts from San Geronimo University in Havana spent their break participating in a first-of-its-kind cross-cultural course on Cuban art and culture.

They explored bullet-riddled walls and rusting military mementos from the 1953-59 Cuban Revolution and visited a farm field to savor the aroma of tobacco used in famous Cuban cigars. They examined the artifacts of indigenous Taino peoples as well as the signs of the bloody legacy of the 16th century Spanish conquest. And they talked politics with English-speaking Cuban nationals in hip urban art galleries, engaging on topics the student had assumed were off limits.

“It was really interesting to hear from their perspective stuff that we’ve been hearing growing up and how those views might be different from their perspective than from ours,” said Olivia Antonecchia, a senior speech and hearing science major from Yonkers, N.Y., who graduates next fall. “There’s such a long history, back and forth, love and hate relationship, between America and Cuba.”

The trip to the three uniquely different Cuban cities of Havana, Trinidad and Vinales was led by Jeremiah Donovan, a SUNY Cortland professor of art, whose focus is ceramics, including the reconstruction of archaic pottery production methods. In the past, Donovan has arranged for classes to study historical, cultural and creative perspectives in China as well as Belize.
But even for Donovan, the March 15 to March 25 study abroad experience felt different. For one thing, they had no language interpreters, and neither he nor the students were fluent in Spanish. Previous excursions to China had involved an interpreter but trips to Belize, largely an English-speaking country, had not. In Cuba, Donovan admits that everyone sort of winged it.

“This trip was truly a pilot program,” said Donovan, who visited Cuba four previous times to establish the class and itinerary. When students finally took the course, sometimes they ate or stayed at a place nobody from SUNY Cortland had visited before.

“These students agreed to live in a land of uncertainty,” Donovan said. “Of course, they knew me from traveling or (prior) classwork. But it truly felt like a brave new world.”

For 10 days, the students focused on the exploration of historical and archaeological sites and made field excursions to rural communities while they attempted to develop an understanding of Cuban culture, the effects of the Spanish conquest of the 16th century on the indigenous Taino population, and Cuba’s place in modern society.

The students got a hands-on understanding and working knowledge of traditional domestic practices such as pottery making, tobacco farming and food preparation in a country that grows or raises nearly all its own food. They were introduced to archaeological findings through lectures and field studies. They spent two nights in Trinidad, a Spanish colonial settlement that now is a UNESCO Heritage Site.
After completing assigned readings of historical and contemporary issues in the Cuban culture, the class members must write descriptive and analytical papers to help Donovan decide how well they grasped the traditional and modern practices and ways of life. Each student will give an oral presentation to the class describing the history and significant highlights of one of the historical sites visited in Cuba.

One thing that won’t show up in the grading book are the students’ favorite memories from the trip.

“I enjoyed going to the Fabrica de Arte Cubano in Havana,” said Kelly Brown of Cortland, a senior studio art major who has a concentration in ceramics. “It’s like this big gallery that used to be a peanut oil factory. It has bars in it and had this nightlife feel to it, totally different than any gallery I’ve been to.”

Some artists dealt with sexual themes beyond what Cuba seems to allow.

“So much of the art was about gender and about sexuality but the government still doesn’t have homosexuality and gay marriage legal,” Kelly said. “I was asking the students about how safe it was to be queer and out.”

The class took guided historical walking tours of Old Havana and Trinidad to gain an understanding of significant changes to the culture brought on by the Cuban Revolution of 1953-59.

“Going to the Museo de la Revolucion (Museum of the Revolution) was by far the best thing I did,” said Andrew James, a senior criminology major from Sag Harbor, N.Y. “There was so much history there of Fidel, Che, Raul and all the revolutionaries. It was in (Fulgencio) Batista’s former palace (the U.S.-backed authoritarian ruler from 1952 to 1959). You can see where the assassination attempt was made against him. Outside, you could see all the revolutionary vehicles, the Soviet tanks, the boat Fidel (Castro) came across from Mexico in during the revolution to overthrow the Batista regime.”

One day the group met other university students in Havana, said Connor Vick, a senior political science major from Rochester, N.Y.
“They definitely have a lot of love for their country but it was interesting to see what they would want to improve on,” said Vick, who will complete a student internship in Washington, D.C., before she graduates next fall.

“They knew a lot about American politics as well and we got to hear their viewpoint about, say, our President Donald Trump and Obama before him. I think they are interested in the capitalistic viewpoint but I see that they still enjoy some of the socialism aspects such as free healthcare and education.”

Consumer products were hard to find and expensive, the students noted.

“It wasn’t like just you couldn’t get Colgate toothpaste,” Kelly said. “It’s like you have to go to this certain place and have your ration cards and get your toothpaste when you are not at work. And then your housing is impacted by (the economy) also, which impacts your relationships and your job. It was just all-encompassing.”

Antonecchia and three other students who had also taken Donovan’s prior Belize Art and Culture course compared the trips.

“The Belize experience, I felt, was more grounded in archeology and looking more at a past, historical experience, whereas the Cuba trip was grounded in the present and looking at how it is right now and our relations with them,” Antonecchia said. “But in a way it’s kind of like looking at the past with the cars, and the way businesses are and way the government is. It’s almost like very ancient.”

“Cuba had such a great infrastructure compared to Belize,” he said. “There was a lot of development along the coastal areas. Everything is expanding. A lot of that can be attributed to how Cuba had trading partners with the Soviet Union in the past and today with Venezuela. When I was in Belize, I didn’t really see a main trading partner.”